Girls basketball ready to bounce back into postseason 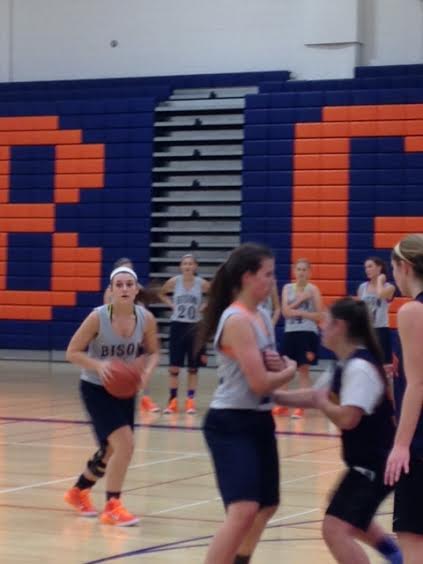 Senior Madeline Callahan plays in a scrimmage at practice.

Last season the girls basketball team went the distance to the sectional semi–final before losing to Fremd High School. Now, the team has come back and is ready to pick up where they left off. According to head coach Stephen Kolodziej, in his career coaching at BG, this team has presented the most potential.

“Potential is a scary word, as it quite simply means to us that we’ve got a shot,” Kolodziej said. “We plan on showing this potential through staying focused from the start and putting our goals over individual roles.”

Part of the team’s success in winning the regional championship last season was the positive vibe that spread throughout the team.

“Last season, we were successful at winning regionals due to how focused our team was,” senior Madeline Callahan said. “Every time we stepped out on to the court, we believed we could win.”

The MSL East provided a lot of competition from Hersey, Rolling Meadows, Prospect, Wheeling and Elk Grove, high schools who all played alongside BG for the sectional championship last season.

“Our conference is stacked with competitive teams that have all had success in the past,” Kolodziej said. “In terms of conference strength in the state of Illinois, it doesn’t get much better.”

The team has high hopes that they can get back to where they were last season and maybe even further.

“I think the team can do it again this year,” senior Julie Jambrone said. “I think we can do it if we have the same mind set we did last year, such as going all out and leaving it all on the floor, being positive, working together as a team and not giving up.”

According to Callahan, the team has a strong sense of hard work, and members have close relationships with one another.

“We always work hard in practice and in games,” Callahan said. “As a team, we have a great relationship on and off the court, which reflects on the way we play. We always have each other’s backs.”

While the mindset of getting back to regionals is still the team’s focus, the team still has to work on the little things to get where they want to be.

“While regionals is still away’s away and we do have the potential to get there, one thing we have to worry about getting better each and every day,” Kolodziej said. “We cannot get caught up focusing on the big things like winning a conference championship or another regional championship, and nee to focus on the little things that we can control.”

The team has a lot to live up to this season, but, according to Jambrone, the team is excited to get the season started.

“I’m looking forward to hopefully winning conference, and regionals, and then possibly playing in a sectional game with the best teammates out there,” Jambrone said.