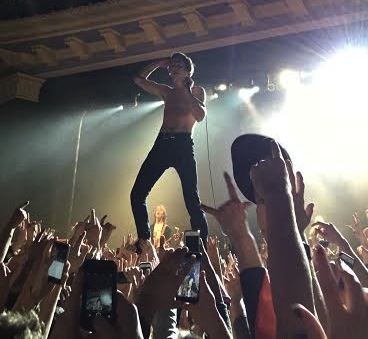 Lead singer Matt Shultz jumps into the crowd during "Come a Little Closer."

It has always been an aspiration of mine to attend Lollapalooza, an annual music festival that features many rock and alternative artists. This past summer I was out of town and unable to attend, and for a long time I was drowning in misery while my friends reflected on all of the spectacular performances. I’m talking Cage the Elephant, Fitz and the Tantrums and Vance Joy. I was incredibly jealous and swore to myself that someday, somehow, I would see these bands perform.

All my wishes came true this past Tuesday, Dec. 2, when I saw all of these artists and two more at The Rave/Eagles Club in Milwaukee. Meg Myers, Vance Joy, Fitz and alt-J opened for Cage the Elephant at the 102.1 FM Big Snow Show. Since my friends and I are procrastinators, we purchased tickets late and they were around 80 dollars each. At first, I thought this was a big chunk of change, but really it was equivalent to about 16 dollars per band, which was the logic I used to convince my mom to let me go on a school night. For the past week my excitement had been running high and I have had difficulty focusing on anything else, and after the best night of my life, I decided that every dollar was worth it.

The concert was at The Rave, a venue at which I had no prior experience with, so I didn’t really know what to expect. However, the venue was very cozy and reminded me of the Aragon Ballroom in Chicago. There were Christmas lights up and the stage was lit up nicely with warm colors of pink and yellow. All tickets were general admission, which meant that I should have worn comfy shoes because the show was standing room only. I had heard rumors of the alleged “crappy acoustics,” but I couldn’t disagree more. I thought all of the singers sounded really great.

Meg Myers was the first to perform. The only song I knew by her was “Desire,” which is one of about ten songs that she has produced. She performed for about half an hour, which was enough for me. She has a beautiful, deep voice, and the first couple songs were really great. But then came the screaming. During one of her songs she started convulsing and it almost looked like she was having some sort of seizure. She couldn’t pull off the whole screamy thing like Lorde can. I was definitely freaked out, but her performance got me all the more excited to see the headliners perform.

Vance Joy is the perfect Aussie with a voice of pure gold. When he sang “Riptide,” every girl’s heart melted. The perfect concoction of singer-songwriter, his voice is charming and his lyrics whimsical. I could totally picture him playing in a coffee shop in ten or so years, and I would totally be first in line to listen to him and his little ukelele.

After Vance Joy finished with “Snaggletooth,” it was time for Fitz and the Tantrums. Fitz has been one of my favorite bands for a long time, and I have heard from my Lolla-going friends that they were spectacular on stage. Although it took half an hour for them to go on, every minute was filled with anticipation and when lead singer Michael Fitzpatrick came on, everyone went nuts. The excitement they portrayed on stage was completely contagious. Within milliseconds, everyone was up dancing and doing other quirky dance moves that are reserved for concerts. Until recently, I didn’t even know there was a girl in the band, but Noelle Scaggs was pure brilliance. If I could sing half as good as her, I would definitely apply to Juilliard. They played all of their popular hits such as “Moneygrabber,” “Out of My League,” and “The Walker,” as well as some older songs. They were one of the best bands I have ever seen, and watching them, I felt a pang of regret  when I realized I missed the opportunity to see them at Lolla as well.

Alt-J came onstage after Fitz, for a reason I cannot understand. I think that it would have made more sense for Fitz, the more upbeat band, to go on right before Cage, but hey, nobody asked me for my opinion. One of my friends is a passionate alt-J fan, but the rest of us only knew a couple of songs. Don’t get me wrong, they are a really talented band; I am not completely into the indie-rock thing they have got going on. The one song I knew the words to, “Left Hand Free,” was played third, so I knew that it would be a long while of just listening and bobbing my head up and down. It was already 10:30 when alt-J started, so I was getting a little tired, and their mellow, slow music was not helping my exhaustion. Maybe it was because I was waiting for Cage to come on, but alt-J played for 45 minutes too long. My friend and I actually left for a while to get a drink. That was when I spent five dollars on a cup of water. Yes, a cup of water. So clearly alt-J did not capture my full attention.

After what felt like an eternity, alt-J played their last song. By now, my feet felt like they were on fire, but I couldn’t wait to see Cage’s lead singer, Matt Shultz. Around 11:45, they finally came on stage, and the energy within the theater was at an all-time high. Anyone who has been lucky enough to see Cage perform would definitely agree with me when I say that they have incredible stage-presense. They are known for their live performances, and I am so glad I got to witness it. Matt Shultz repeatedly jumped into the crowd and at one point was standing up on people’s hands, cheerleading-style. Of course, this encouraged random concert-goers to start crowdsurfing, but that is besides the point. They played all of their best songs,  quieter ones like “Cigarette Daydreams” andclassics like “Ain’t No Rest for the Wicked.” They had everyone dancing and screaming out lyrics. My personal favorite was a tie between “Telescope” and “Take it or Leave it.” Or their finale, “Come a Little Closer.” Actually, I can’t decide on a favorite because they were all completely incredible.

Although I didn’t get home until 2 in the morning and my vocal cords had endured a beating, the concert was one of the best night of my life. The next day, I repeatedly watched the videos and pictures I took, and experienced the post-concert depression that every music fan faces. All the bands were fantastic, and The Rave/Eagles Club was the perfect venue for them. What I took away from this, besides sore feet and exhaustion, was that I need to be more up-to-date on my concerts so that when any of those bands come to Chicago, I will be the first to buy tickets.