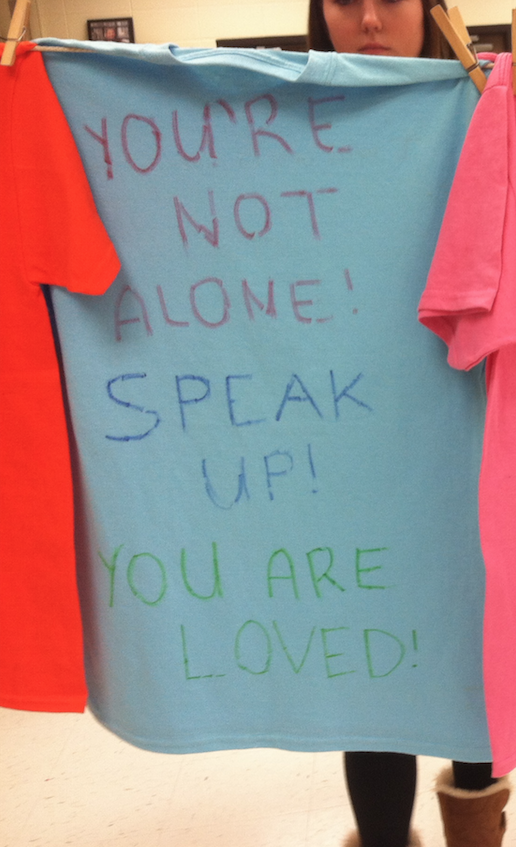 T–shirts displayed with the stories of survivors who went through sexual assault.

Over the last few years, Northwest Center Against Sexual Assault (CASA) has been working with BG’s health education program. Northwest CASA, a support center for victims who went or are going through sexual abuse, sends representatives to talk to health classes each semester. Its objective is to bring awareness to the issue of sexual abuse.

As a part of their lesson, Northwest CASA brings in T–shirts that are a part of their Clothesline Project. The shirts are hung in the Community Room and are written on by teenagers who have gone through any kind of abuse. The T–shirts were brought in on Dec. 16 and 17.

“The main idea of this activity is to raise awareness for assault, abuse and date rape,” O’Donnell said. “We hope students realize that this is an issue and it could happen to kids like them.”

“The whole project made me really sad when I realized how many people had to endure such a life changing event,” James said. “I thought it was a really effective way to open people’s eyes to what happens and how negatively it can impact a person’s life.”

According to RAINN.org (Rape Abuse Incest National Network), 44 percent of sexual assault victims are under age 18. Every year in the U.S., there are about 237,868 victims of sexual assault.

“During the activity, there’s noises going on in the background,” Prevention Education coordinator Shannon Sloan said. “Every nine seconds, someone in the U.S. is physically assaulted. Every minute, a whistle will sound to symbolize that a woman is raped. Every four minutes a bell will go off to symbolize that every day four women will die from domestic abuse.”

Sexual assault is one of the least reported crimes in America. About  60 percent of rapes go unreported. Not only that, but only three percent of convicted rapists will spend a day in prison.

Sophomore Jack DeLattre went through the Clothesline project on Monday.

“It’s pretty graphic,”DeLattre said. “It’s really eye opening because all of the stories are from local areas. The cuss words on the shirts surprised me because it made it that much more realistic.”

To seek help for anyone who is a victim of abuse, the 24 hour hotline is 1-800-656-HOPE. The hotline is anonymous for the privacy and protection of the victims.

“The most important thing kids need to know about reporting assault is that it is never the victim’s fault,” O’Donnell said. “Kids need to not victim blame. Hopefully after seeing the T–shirts, they will be more understanding.”