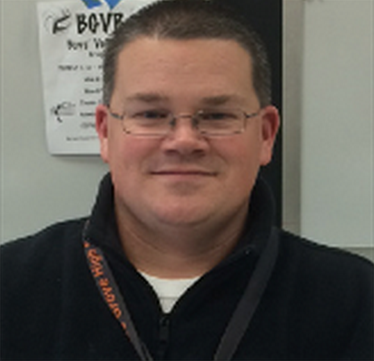 Last month, players and coaches in the volleyball program were in shock after receiving news of the resignation of head coach Matt Aiello. During Aiello’s nine years at BG, he coached the team into the State finals with finishes in fourth, third and second, as well as a countless number of conference and regional championships. Aiello will be replaced by Tim Kosiek, a familiar face in the program, who has coached freshman and junior varsity for many years.

“Aiello, Peterson and myself have been working together for 10 years,” Kosiek said. “We are friends beyond the volleyball court. Coach Aiello made the difficult decision to step down to be more available for his family, and I’m honored to step in on his behalf for a program that my family has been a part of for so many years.”

According to Kosiek, he is very excited to become head coach because of the talent this year’s team has to offer. With ten years of volleyball coaching under his belt, he expects a smooth transition heading into the season.

The team has had the chance to be coached by Aiello for some time now, and were saddened to hear the news. Though upset, the team is going to take this news and motivate themselves to make a statement this upcoming season.

“Of course it hurt hearing the news about coach (Aiello), he has been my coach since day one,” senior Athan Cruz said. “But that is not an excuse, we have a great new coach and we are ready to win no matter what.”

Cruz had the opportunity to speak with Kosiek regarding the coaching change and the upcoming season when Kosiek took it upon himself to meet with the players individually. Kosiek believed it would be best to inform the team of the situation well before the season begins in order for the team to recover and begin preparing.

“Coach Kosiek did a great job of handling an unexpected situation,” Cruz said. “Being as quick as he was to inform us and calm us down really showed us that he was ready [to take over].”

Though the varsity team is used to Aiello’s coaching methods, Kosiek has played a large part of their development. Kosiek was a coach at the non varsity levels, the important younger levels which help mold players into what the program expects out of their varsity players.

“Kosiek, as well as Aiello, have been right there with us since freshman year,” senior Tullio Ruscitti said. “We have a great chemistry with Kos and he is the right person for the job.”

The team is determined to not let an unexpected resignation disrupt their  season.

“Change is always difficult, especially when losing a head coach that has had such a positive impact on this program,” Kosiek said. “But change is a part of life and  a part of volleyball.  I believe the players will adapt, adjust and grow as we transition into this season.”