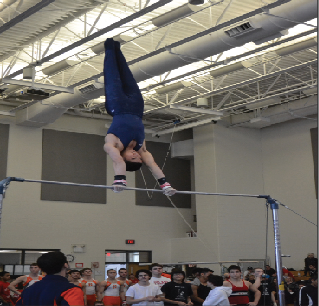 This month, the boys gymnastics team began preparations for the upcoming season by holding free plays after school. Free plays are where veteran gymnasts could continue working on their routines and new gymnasts could begin to discover what their strong suit is.

This season, the team will led by returning seniors, including Jacob Kerman and Tyler Cho, and guided under head coach Zach Crandall, who will be entering his tenth season as a gymnastics coach and his third as the head coach.

The team will compete in their first meet of the season on March 5 at the Prospect Invite. The seniors will look to start their final season off on a high note, and will be looked upon to lead the younger members who will be competing in their first meet. However, Crandall knows that this is just one step in the long season ahead of them.

“We want to win the MSL East for the fourth year in a row this year,” Crandall said. “We’re also determined to become conference champions as well.”

Unlike girls gymnastics, boys compete in different all around events such as pommel horse, rings and bars.

After qualifying for the IHSA State meet last season, Cho has taken it upon himself to work hard in the off–season to bring his skill to another level.

“This past off–season I went to a gymnastics summer camp three times a week,” Cho said. “In additon to that, whenever I had free time, I made sure I worked out to get stronger.”

According to Cho, he was introduced to the sport at the CAF night as an incoming freshman. He ended up talking to the coaches, who persuaded him to try out, and when he went to the free play he immediately fell in love with the sport.

As with most high school teams, the seniors are often looked upon to guide the way for younger members during the season, whether it’s by motivating them during a routine, or pushing them to succeed during a practice.

“The seniors on this team are very committed to winning,” Crandall said. “They’ve been great leaders for our younger members as well.”

After a great season last year, the team has high hopes for this season and believes it can exceed expectations.

“This team has so much potential,” Kerman said. “Our varsity team is a lot bigger, and the guys on the team are so close with each other, which gives us a huge advantage.”