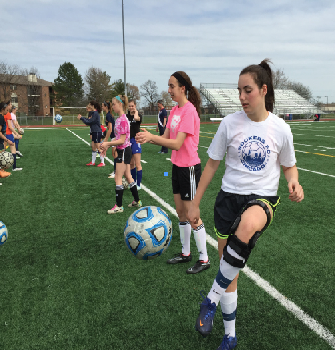 More difficult than having a great year in a sport is the dedication required to maintain a high level of athletic consistency. Girls soccer has seen a lot of position changes; however, members of the team remain hopeful that they will be able to surpass communication related challenges. According to senior Jessica Kovach, the team has lost eight seniors from last year, as well as four players this year due to injuries, three of which are starters. Yet there still remains a sense of optimism among all team members.

“I was not sure what to expect since we lost so many players last year, but we’ve had so many underclassmen step up,” senior Sarah O’Connor said. “I think [sophomomores] Georgette Topalis, Courtney Lee and [junior] Cassie Berman are exceeding expectations already as it is and it has helped us a lot. We are off to a good start, but soccer isn’t a sprint, so we just need to keep working hard and that will take us places.”

Furthermore, the team has developed new strategies to improve communication amongst team members. Kovach says the team is now working on drills that deal with defensive situations. Apart from these different practices, the team has also started to watch more film of their own games. Kovach estimates they watch one game a week depending on how many they play. These recordings are crucial to the team as they are able to learn from their mistakes and see how to best put people in different positions.

“I attribute past success to hard work, dedication and talent,” senior Sara Busse said. “When those things are there, teams will be successful. This year we have maintained that momentum by following the same path. With things we can’t control like injuries, we continue to battle through diversity and give our best effort at all times.”

By far, the biggest change on the team is the increased focus on communication with the younger members. Four freshmen and sophomores have joined the ranks of varsity due to the injuries of older members. Although there is a younger team on the field, Kovach still says that the team has the same expectations as years past: win the MSL East conference title and to do great in the Soccerbowl and State playoffs.

According to O’Connor, many of the players did not meet before the season started. This will prove to be challenging as the players will have to learn each other’s personalities and playing styles.

“It’s challenging keeping up with the seniors, but they’ve been really helpful giving advice on what to do,” freshman Katharine Hanner said. “Usually when we hit certain spots in the game, it’s easier to have good communication. It’s kind of hard, but we all put a lot of work in individually.”

Coach Patrick Dudle also remains optimistic about the work ethic that the team is putting in towards the season. He hopes for a closer team in the near future.

“I think some of the newcomers are getting used to the speed of play and the physical aspect of varsity soccer,” Dudle said.   “We have taken strides forward in our chemistry on the field as well.  The camaraderie has been great. I really enjoy being around this team.  So many of the girls are selfless, and put the team first. We hope to be playing our best soccer in May.”