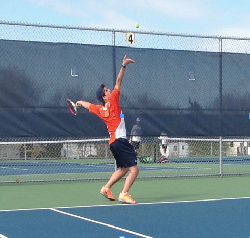 Just a year ago, the tennis team finished the season strong in the MSL Conference and State tournament. This year, the team is looking forward to once again starting their pursuit towards a great conference finish, but without  the same teammates. This season, the tennis program saw an surprisingly low interest amongst the students.

At the start of the season, signs were displayed in and around the boys locker room, advertising that the tennis team was looking for any new recruits regardless of skill  level. After losing many successful State qualifying seniors, like Peter Georgiades and Alan Fijalkowski, the team had many spots to fill.

According to head coach Michael Naughton, pressure to fill the spots was not too high, but it’s always an advantage to have a full roster. This year the roster will be filled with many new players responding to coach Naughton’s message.

“It was shocking at the first meeting to see the lack of players on the roster, even with the numerous amount of seniors that had left,” Naughton said. “I printed the flyers out to let the students be aware of a great opportunity they have when joining the tennis program.”

With an undersized group of tennis individuals, certain players had to take on the important role of leadership. Senior Anton Levitin is now entering his fourth year in the program. In his previous years he was successful in playing singles and doubles. He is knowledgeable of his role as a leader, as well as what the team will have to do in order to be successful.

“Being that this is almost a completely new team, we need to be able to count on each other and cheer each other on,” Levitin said. “Being a close team brings us one step closer to winning matches, and winning is obviously a huge priority.”

According to Levitin, the shortage of players was unfortunate, but allows the team to focus on the players who want to get better and became more involved with the program. On the court it will be easy to spot new faces, faces that were interested after hearing about the lack of players, and were eager and energetic to try out a new sport.

“When seeing the posters and talking to classmates about tennis, it seemed like a great activity to try out,” senior Adnan Khan said. “I’m excited to help out and participate for the school in any way, and playing tennis is a great way to do just that.”

The team will participate in the Leyden Invitational tomorrow at 8:30 a.m. The season is well underway and players are ready for an eventful spring.

“As soon as we push through roster challenges and unite as a team, there is no stopping us from doing things nobody thought we could do,” senior Cameron Davidson said. “We will motivate each other and bring out the best in our young team.”