Out of the Maze and into the Scorch 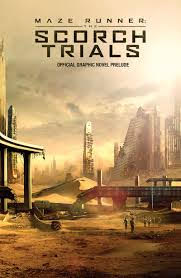 The latest thrilling installment in “The Maze Runner” trilogy, “The Scorch Trials,”released Sept. 18 was everything and nothing I expected it to be at the same time. Actors Dylan O’Brien, Thomas, Kaya Scodelario,Theresa, Ki Hong Lee, Minho and Thomas Brodie-Sangster, Newt, were even more phenomenal in this film than the last.

Having finally escaped the walls of the Glade and losing many of their counterparts along the way, Thomas and his remaining friends are once again at the hands of WICKED, World in Catastrophe: Killzone Experiment Department.

When the gang discovers where they are, along with the help of their new friend Aris, Jacob Lofland, they escape the clutches of WICKED and move out into the Scorch, where they will go on a hunt for WICKED’s opposing organization “The Right Arm.”

It was definitely a pity that this movie didn’t follow the storyline with as precise detail as the book. As a longtime fan of James Dashner’s series, I would expect him to be on the set during production saying, “Excuse me, but please do not butcher my beloved book!” Unfortunately that wasn’t the case.

Director Wes Ball didn’t even butcher it per say, but it did not by any means follow the plotline of the book by even 60 percent. Which of course, is a major point of contention between film-makers and seasoned bookworms such as myself.

For example, in the novel the characters are not all immune to the flare present in the Scorch, however, they were supposed to be tested for it. In the film depiction, this wasn’t done and with the lost details a central plot point was missed.

Despite the inconsistency between the movie and the book, it was absolutely amazing. The film captured the personalities of the infected characters perfectly. The action scenes, which were stages through the majority of the movie, were breathtaking. The ending battle scene seemed as though it was filmed for the purpose of enticing moviegoers and making them feel as though they were right beside Thomas and his friends joining the fight .

Ultimately, this film deserves a definite four stars. While it could have been truer to the book, it still lived up to moviegoers’ expectations, according to the rave reviews on Fandango.com. If you are someone who is okay with loosely reported details or if you simply haven’t read the books, this movie is bound to be your next must-see thriller.