Be prepared to scream with laughter while watching “Scream Queens” 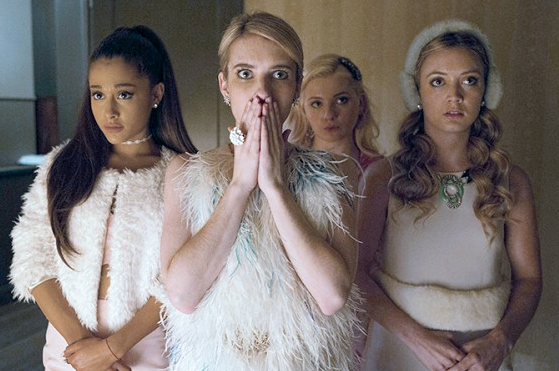 A shot from an episode of Scream Queens.

Murphy and Falchuck’s latest project is a brand new take on Greek Life, where the latest pledges for the Kappa Kappa Tau sorority house and all their sisters are being targeted by the mysterious “Red Devil.”

In this aspect, the show resembles ABC Family’s “Pretty Little Liars,” where the main characters are being stalked by the terrifying “A.

However, unlike other somewhat horrifying shows, “Scream Queens” is meant to make viewers laugh. Granted some moments of the show can be a little scary, some of the gore is simply ridiculous. The Red Devil has now become known for carrying a chainsaw, and when that is inflicted upon the victims, the bodies far too heavily resemble mannequins,  become yet another cheesy attempt to add to the comedy aspect.

The show mainly follows Grace, the latest pledge who is a descendant of a former Kappa. When she uncovers a dark secret hidden within the house, she tries to decipher it as it could be the reason behind her and the other Kappa sisters being first on the Devil’s hitlist.

One must keep in mind that this show is classified in the comedic genre whilst tuning in, or they will quickly get turned off. The first time I watched the show, I was torn between thinking it was stupid or funny. Eventually though, the plot began to thicken and I settled on the latter.

Each of the actors puts on a stunning performance to jazz up the antics. Nick Jonas for example, strays far from his Disney roots when playing Boone, a self-righteous frat boy with feelings for his friend Chad Radwell.

All the while, the Kappas are fighting mercilessly to keep their houses open and out of the way of the wrath of Dean Munch, played by Jamie Lee-Curtis. Curtis sort of embodies the essence of Jane Lynch, who played Sue Sylvester, the villain in Murphy’s last sitcom “Glee,” and she does it beautifully. For a woman remembered by me as playing a doting mother in “Freaky Friday,” she makes a spectacular antagonist.

The dynamic duo of Falchuck and Murphy have certainly pulled off another hit.”Scream Queens” is sure to be frighteningly hilarious for any who decide to tune in.