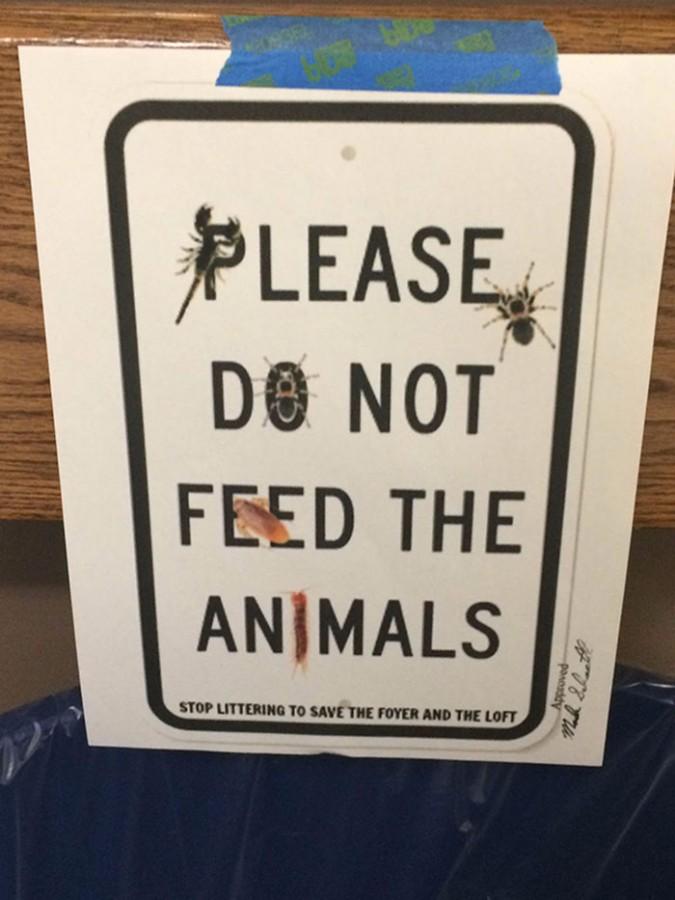 Flyer used to promote awareness of littering and the effects of it.

Many students and staff members have noticed an increase in the amount of litter around the school. The rising amount of litter has led to a larger–than–normal mice population in the building. Consequently, several areas such as the loft and main foyer could be closed during the day if the litter problem isn’t fixed. The administration has teamed up with Student Council in order to try to correct the problem.

According to associate principal Dr. Jill Maraldo, the litter problem is not completely new this year. However, the administration has seen an increase in the amount of litter in areas such as the main foyer and the loft, especially during and after lunch hours.

“We’ve opened up a lot of spaces for students to be during lunch hours,” Maraldo said. “We like students to have that flexibility, but we’re noticing folks are not picking up after themselves.”

Coinciding with the excessive amounts of litter, there has been an increase in the population of rodents and bugs throughout the school. The district does have a contract with an extermination company which helps to keep the issue under control, but it isn’t as effective with large amounts of litter present.

Litter can also negatively impact the appearance of the school. According to Maraldo, visitors can have terrible first impressions of the school if they visit through the main lobby while it is filled with litter.

“We have so many people that come into the school,” Student Council president Kristina Dominguez said. “We don’t want it to look trashy because we take pride in our school.”

Initially, when the litter issue was brought up to the building operations committee, some members of the administration were in favor of closing down the loft and the main foyer during lunch. Even though those changes weren’t put into effect right away, if the state of the litter isn’t improved, it could result in them being implemented.

“If you took away the loft and main foyer from lunch hours, everyone would be crammed inside the cafeteria,” Student Council treasurer Teresa Riles said.

In addition to lunch time closures, students may also lose the privilege of eating snacks in class. According to Riles, this could really hurt students who don’t have a lunch because eating in class is the only time during the day they get a chance to eat.

“First we have to make everyone aware of the problem,” Riles said. “Once they’re aware, we can start enforcing changes.”

Changes may include adding more trash cans and recycling bins around the school. Other suggestions include possibly having a competition between the different grade levels to see who can keep areas of the school the cleanest.

Students can help take part in solving the litter conflict. Acts such as throwing away trash rather than leaving it on the ground or picking up any other trash that’s left by peers can help lessen the litter.

“If everyone could just clean up after themselves after they’re done eating, we won’t have this problem,” Dominguez said. “That’s one simple solution.”