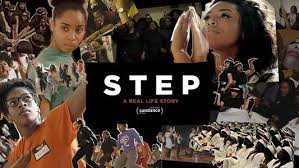 I initially walked into a screening for the film Step a few weeks ago expecting an hour and a half of upbeat choreographed dances used to illustrate the energetic and hardworking inner city dance crew which was the director’s focus. The trailer exuded grace and empowerment portrayed from a perspective that is rare to see on screen.In the documentary, the lives of several young woman from Baltimore were put under a microscope and audiences were given a breathtaking and insightful glimpse into their journey to success.

The film was initially released at the 2017 “Sundance festival” and received the “U.S. Documentary Special Jury” award which prompted its release in theatres.On August 4th audiences in select theatres were introduced to this beautiful story about sisterhood and community. Ann Hornaday( movie critic for the Washington post) said “this movie fires on every cylinder, investing viewers in personal stories that couldn’t have higher stakes and inviting them on a journey that pays off in ways expected and utterly surprising.” The film uses Cori Grainger,Tayla Solomon and Blessin Giraldo as it’s leading ladies to depict the diversity and complexity of inner city teenagers. Each of them have very different backgrounds and personalities but they all share a common goal and pure hearts.

Its limited availability may have hindered its commercial success but critics across the country have been raving about this film and searchlight has optioned to create an adaption of this piece.There are so many films about supernatural forces or action heros being produced and debuting before viewers even have the time to blink, therefore small independent films such as this one often gets swept under the rug.

Thrilling sci-fi films and psychological thrillers are often very entertaining and worth the over expensive snacks which are enjoyed during the viewing but every once in awhile a smaller  production is refreshing to see. Director,Amanda Lipitz, uses three girls who participate on the team to convey a bittersweet tone which builds throughout the progression of the film.The comparison between Cori and Blessin’s home life showcases how this organization Brings these girls together and uplifts them in spite of their different upbringings.

Cori fortunately lives within a functional and supportive household which contributes to her academic success while Blessin struggles to maintain grades partially due to her mother’s depression.This documentary finds a perfect balance between displaying the internal hardships which plague these girls and highlighting their triumphs.For years we have seen hyperbolized and borderline satirical dance films centered around extremely attractive teenagers with nothing to do throughout the day but dance and worry about if their crush shares mutual feelings. Colorful franchises like Step up and Bring it on trivialize the artform and rarely speak to the reality of adolescence.

Step eliminates this illusion and shows audiences that it is far more than eight counts and reveals its true meaning to these Baltimore teens. As underprivileged youth dance serves as both an outlet and an opportunity to rise above their environment and tap into their highest potential. Although their personalities often come across as polar opposites there are very few clashes and this speaks to the team’s cohesion. Another thing to note is the accurate and insightful representation of modern black woman which does not sugarcoat the experience or overdramatize it.

They are not portrayed as loud and obnoxious or as one dimensional side characters. Outside of its focus on young black womanhood it is really a story about creativity blossoming from adversity. I think that a lot of people just missed out on an amazing film but hopefully it will soon become available on Blu-ray and several streaming websites.