The Bold Type makes a subtle and yet Bold statement 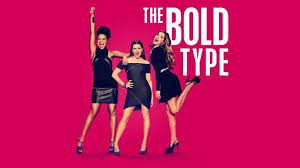 The Bold Type is a new Freeform show featuring the lives of Jane, Kat and Sutton: three young women working at a global women’s magazine similar to Cosmopolitan with struggles that women encounter in the workplace and society, such as immigration and sexuality. Classified as a “dramedy”, the show features undertones of a much larger agenda.

“I think a well executed piece of art especially something mainstream can change hearts and minds,” Rachael Moyer, creative writing teacher, said. “People don’t want to be lectured at, they tune out.”

Politics have always seemed to be on a low spectrum for the youth of America. In 2012, when the American National Election Studies “ANES” asked a nationwide sample of people about their general level of interest in politics, roughly half of Americans under the age of 30 said they paid infrequent attention to politics and elections.

“It’s always been that way,” AP government teacher Zachary Crandall said. “A lot of young people in the 70s were involved because of Vietnam but now young people see no direct reason for involvement.”

Now, politics seems to be reaching the younger demographic through entertainment. Lots of shows such as Last Man Standing, Girls, Veep, and Blackish have political attachments.

“I think if there are shows that are more willing to talk about those issues and are engaging it might be helping millennials,” Crandall said. “But, It’s important for the audience to understand that it’s biased and can distort politics and issues.”

The Bold Type seems to be making a different statement. While many are considering it to be the new face of feminism and feature left wing components, it reflects Sex and the City, The Devil Wears Prada and Friends with a twist of feminism, immigration laws, and sexuality weaved in.

“I wouldn’t say the main characters are super diverse, but they are relatable,” senior Anne Kirsh said. “They don’t set a cookie cutter standard.”

The show has displayed how woman should support each other rather than judge through strippers and a lawsuit. It has shown the audience what it’s like to be under the scrutiny of the media through twitter and sexual harassment. It has revealed how to be comfortable with questions that were taught to be uncomfortable and suppressed. It has indistinctly taught love, understanding and open mindedness.

“I think [the show] is helping because it doesn’t shove their opinion in your face,” Kirsh said. “It’s not politically charged but it does have aspects in it.”

As much as The Bold Type is about feminism and empowerment, it’s also just a normal T.V. show about a young group of friends finding their way in the world. Some may say we should not be giving it more credit for adding in short layers of reality.