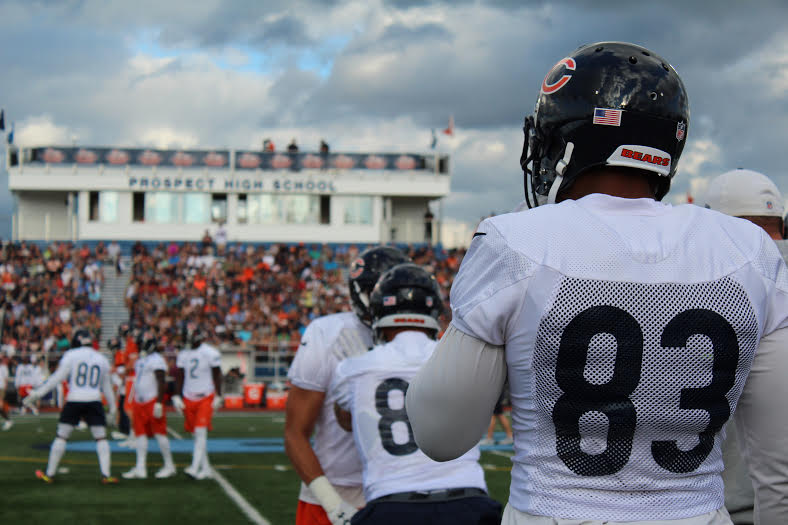 On August 17, Prospect High School was the location of the Chicago Bear’s second annual Varsity High School Takeover, an event where the team hosts an open practice for local fans. Tickets to the event sold out extremely quickly, with around 6,000 people attending the event.

“At first I was pretty shocked that the Bears would be venturing out so far into the community,” senior Tyler Lubbat said. “I knew the Bears were focusing on connecting more with the community, but it was still surreal that they had chosen one of our district schools as a venue for practice.”

The Bears practiced on the field, going through warm ups, running various drills as well as scrimmaging for a period of time. For many attendees, it was an opportunity to really see a professional team up close, in a way different than a game at Soldier Field or practice in Bourbonnais.

“Because it was a small high school football stadium you were actually pretty close to the players, as opposed to being at Soldier Field where you’re way up high,” chemistry teacher Andy Park said.

The smaller setting lent itself to a more direct view of the team and athletes. The Bears ran different drills around different parts of the field, so spectators could really see a variety throughout the practice. After the practice ended, many players made their way to the stands and signed autographs for fans until their busses had to leave to take them back to Soldier Field.

The event went beyond just the actual practice, though, as the Bears organization had also set up inflatables, face painting, a mini monster football zone and pass, punt, kick zones for younger attendees. The Bears created a very family-friendly atmosphere, adding to the community focus of the overall event.

“A lot of people were around just enjoying watching the football and talking,” senior Hailey Szydlowski said. ““It was a very social event.”

The entire experience of the Varsity Takeover impacted a wide range of people from the community. Many football teams from the district also attended the event and were able to sit in special bleachers closer to the field. It was a chance for high school athletes to really see what it’s like to play professionally and for some to even meet their idols.

The experience is even special for the Bears players themselves. According to Chicago Bears Cornerback Sherrick McManis, who played high school and college football in the Chicagoland area, the Varsity Takeover is a chance for professionals to feel like they’re back in high school, playing football for fun.

“It was like being under the lights again,” McManis said. “Friday night lights. It was fun out here.”