Broadway’s “Newsies” will steal your heart 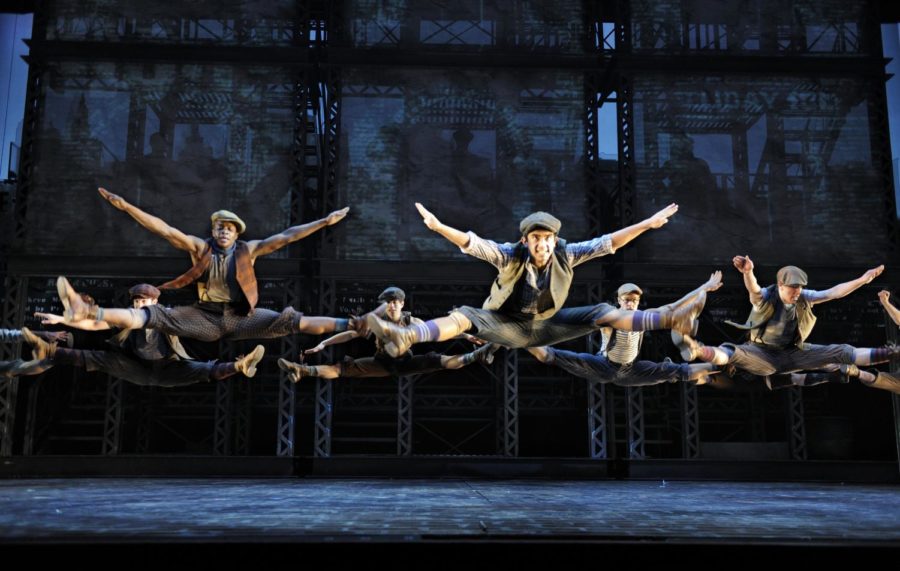 This fall, the Marriott Theater presents “Newsies,” a musical about the newsboy strike of 1899, located in New York City. Not only is this musical still on Broadway, but it’s available on Netflix now as well. The rights to this show have just been made available to the public, but “Newsies” isn’t a musical you can produce in a few months. From the precise choreography to the moving sets, “Newsies” is a show that any musical theater fan can appreciate.

The main character Jack Kelly, portrayed by Jeremy Jordan in the original Broadway cast, is an orphaned newsboy who wishes for more than a city life. The cast mainly consists of newsboys, each of them insanely talented in dancing, acting and singing. You can’t help but fall in love with the Newsies after seeing this show. Each individual character adds depth to the show, making flips and intricate harmonies look easy.

One of the main characters that stands out is Les Jacobs, portrayed by Ethan Steiner in the live recording of “Newsies,” and what’s glaringly apparent is that he’s only ten years old. He adds a comedic effect, and even though he might be trying a little too hard to be a kid, talented child actors are hard to find.

An interesting aspect of the show is that there are only a few women in the cast. The plot doesn’t necessarily call for many girl characters. Katherine Plumber, portrayed by Kara Lindsay in the original Broadway cast, is an aspiring journalist in the 19th century, which is progressive for the times. She’s ambitious and independent despite, spoiler alert, being the daughter of Joseph Pulitzer, who owns the New York World newspaper.

Katherine is also Jack Kelly’s love interest, but she still has her own story. In fact, the element of a love story doesn’t even occur until almost the end of the show. The story is more centered on friendship and revolution, so the love story is almost an afterthought.

Almost every song in the soundtrack will make your heart sing, as even the Newsies’ voices are filled with emotion and energy. Although, only listening to the soundtrack takes away an important aspect of the show. “Newsies” is a musical filled with dance.

In the true story of the newsboy strike, the newsboys who were fighting against the raised price of papers were younger, but the Newsies portrayed in this musical are professionally trained in dance and definitely not kids.

The Newsies make flips and cartwheels look effortless. During every large dance number, you’re never bored. Between using newspapers to dance on and the endless turns, the Newsies aim to impress.

With shows like “Hamilton” and “Waitress” growing in popularity, common musical stereotypes such as bursting out into song in the middle of a sentence or tap dancing are beginning to fade. Tap has almost become forgotten with modern Broadway musicals, but “Newsies” brings it back.

In the beginning on the second act, we open on the newsies after their story debuted on the front cover of the newspaper, and the number, “King of New York” shows how these kids feel about being famous. Just when you thought the Newsies couldn’t get any better, that they can tap.

This energetic musical number contradicts the tense ending of Act One, but it still adds to the plot. One of my favorite parts of the number is that the Newsies add to the orchestra, not only by tapping, but using literal spoons to add to the rhythm.

It might not seem relevant to current events and our modern world, but the message of “Newsies” is still important. When there’s inequality, if you speak up and unite you can make a difference. At the end of the musical, everyone gets their story book ending, even though Jack decides to stay in New York City.

“Newsies” is an iconic Broadway musical and even if you can’t afford to go to a theater, it’s still available on Netflix. It’s a triple threat, excelling in acting, singing and dancing.