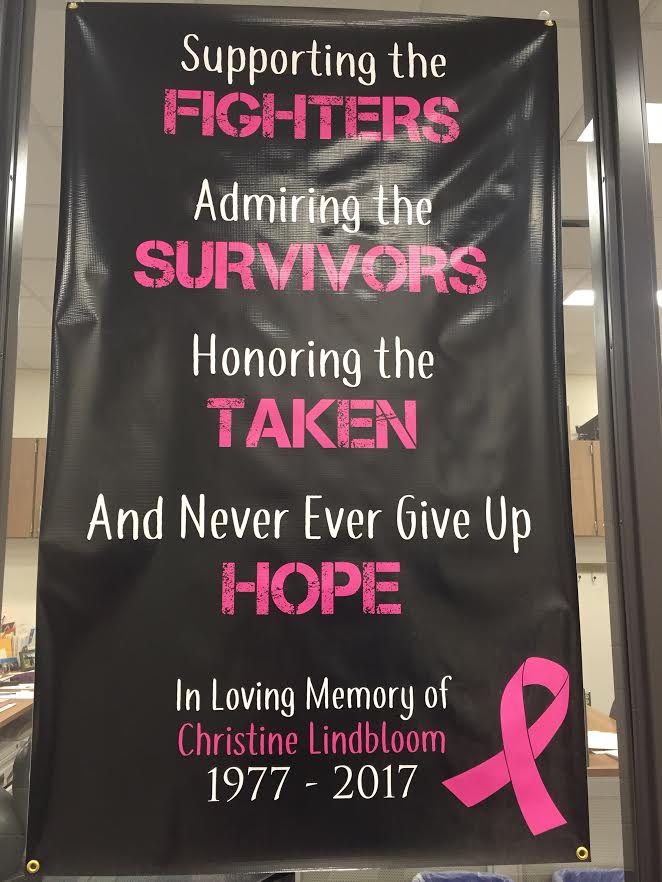 October is National Breast Cancer awareness month. That means everything turns pink. From coffee cups to gym shoes, you can probably find something pink alongside the Halloween decorations and pumpkins.

But what does the color pink do to support breast cancer awareness? Most of the large corporations that sell pink gear in October pocket most if not all of the money.

According to The Huffington Post, an example of this is the NFL’s Pink October campaign in which the players wear pink and pink gear is sold to fans.  Most people might be surprised to know that not a single dollar of the money goes towards research.  Although 8% of the proceeds are donated to the American Cancer Society, the money is spent on promoting screenings and general education, but only for the cities within the NFL Franchise.

At first thought this may seem like a good thing, but education and promotion of screenings is not enough.  Donations and money should be spent on research related to cures, better treatments, and the care of women battling the disease. These campaigns have certainly made people more aware of the risks, which is a good thing, but what are we doing for the women who actually endure breast cancer of the families affected by losing someone? More education has been a great place to start allowing for early detection to catch cancer early, but at this time in our pink endeavors we must push for more.

One in eight women develop breast cancer according to Breastcancer.org, but the people diagnosed aren’t the only ones affected. For BG, breast cancer is a topic close to home. In the past year, math teacher Christine Lindbloom passed away after battling breast cancer, and some of the recent fundraisers at BG have been focused on supporting her family.

The PE department hosted the first Lindbloom Fun Run, and there were several other fundraisers to help out the Lindbloom family. Pink bracelets with Lindbloom’s name were sold to support the cause. Recently, Arlington Lanes hosted a bowling fundraiser for Lindbloom’s sons. These events not only raise awareness for breast cancer, but they tangibly support those affected by breast cancer financially and emotionally.

“Our community is generally more aware, not only because of what’s recently happened, but also through social media,” math teacher Rhonda Whippo said. “You can see people sharing their stories, posting comments on Facebook and soliciting support.”

Although there are fundraising websites where you can easily donate, some people simply buy a pink shirt without truly researching or considering the source.  Most people assume that purchasing a pink item is doing something tangible to help the cause.

“There is always more that everyone can do other than wearing pink,” junior Kajol Karwal said. “Every little thing counts.”

According to NPR people really need to read the fine print.  We should truly look at the organizations that companies are donating to or if they are truly donating at all. We also need to remember that the severity of the disease can often get lost in a sea of pink.  We need to place the emphasis not just on detection but treatments and cures.

Foundations such as The Pink Fund Inc. and National Breast Cancer Coalition Fund don’t only focus on awareness. They work to support the women behind the illness, giving short-term financial aid to those diagnosed and educating women on the facts of breast cancer.

CharityNavigator.org is a great resource in which you can search any charity or organization.  The site works to rate each charity on accountability and transparency in addition to financial health.  Many would be surprised to discover that the American Cancer Society is only rated at two out of four stars and Susan G. Komen for the Cure is rated at three out of four.  The site allows you to see rationale for the ranking, how much operations cost versus donations, and a multitude of other pieces of information about each organization.

This is not just a skill or tactic that should be used when considering donations to Breast Cancer research alone, but with any charitable act.  With the recent hurricanes there have been many stories and reports about The American Red Cross and how financially responsible they are being.  Accusations of resources not being properly allocated followed after relief for Hurricane Sandy.  These reports and the pressure put on the organization it seems, have led to important measures and changes made by the organization to be better and do better.

This is what we must do.  We must truly look at the organizations under a microscope and not just assume because they aim to do good in the world they are functioning and doing so in the best possible ways.  We must call them out when they are not spending our donations responsibility and effectively.  We must know exactly what is is we are donating to and not just feel satisfied or content that we tried.

This October BG has created a wall of honor and gratitude in the math/science area, where students can leave a positive message to honor those in our community affected by breast cancer.  Add your messages, stories, and thoughts to remember and honor those we have lost, those still fighting, or those who will one day impacted.  In their honor, please continue to wear the pink that helped to truly start and continue the conversations about Breast Cancer, but also commit to doing more.

“Awareness is the first step to supporting the cause,” Whippo said. “It solicits more support, but there’s still so much more that people can do.”