Go to Neverland in the fall play “Peter and the Starcatcher” 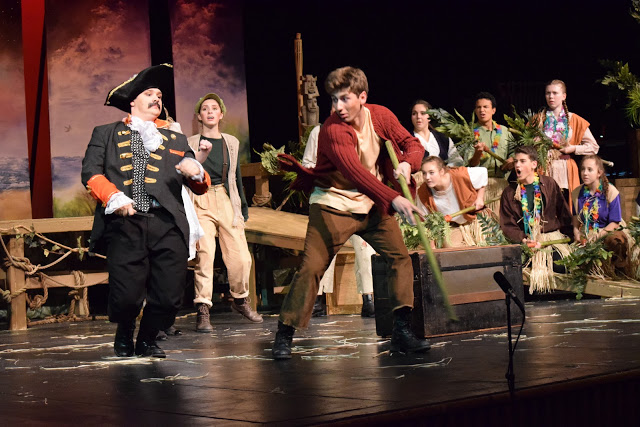 This year’s fall play brought students a look at how the iconic character of Peter Pan came to Neverland. The show “Peter and the Starcatcher” by Rick Elice, based on the book by Dave Barry and Ridley Pearson, opened on Oct. 12.

The play is a prequel to the classic story of Peter Pan. The show follows a boy without a name, a young girl named Molly, her father, and some other orphaned boys in their quest to keep the powerful “Star Stuff”, a  which makes the user what they want to be, out of the hands of the nefarious pirate Black Stache.

Auditions for the show took place during May of the previous school year, and the cast started putting the show together in the fall.  This was a unique show to rehearse since the students  didn’t learn the show in order.

“Normally we work chronologically, but for this we’ve been working out of order, which makes it even cooler to see it all come together.” junior Carly Colen said.

Another difference in the setup of the show is the minimalist sets. In spots where they would usually have a specific set, for example a church or a gangway, the students had to use their bodies to make the impression of the place.

“Something really cool about this show is that it’s built from the ground up,” Colen said. “We’re using our bodies to make pieces of the set and to show things where we’d usually have props.”

Tech crew also put in a lot of work to get the show ready for opening night. Sound, lights, costuming, and sets were all done by students. Despite the differences in the preparation for this play compared to past ones, the crew was prepared due to many of them having worked on shows at BG before.

Outside of the minimalist set, the show includes a background painted by student Lucy Greene of the night sky. This painting was made over the course of several weeks, and serves to enhance the  fantastical atmosphere of the show.

This year, the cast is trying to take the show to the Illinois High School Theatre Festival held annually at Illinois State University. While any high school theatre program is free to go, only certain shows are selected to perform at the festival. During the festival, students go to workshops and see performances of the different shows that qualified.

In order for the show to qualify, judges come to one of the performances and gave feedback to the cast on their performance. Shows are notified if they made it in late November, then spend December and part of January preparing. At the festival, they perform the show for the other theatre programs in attendance.

“It’s a really unique experience,” Wells said.  “It’s for other theater students who are really supportive of what they’re doing, so it’s a really exciting place to perform.”

Auditioning for the festival didn’t change the rehearsal process or their usual performances, according to those involved with the show. If they get in the festival, any preparations they do would not take place until after the show closed. The cast simply focused on creating the best show they could, regardless of any future audiences.

“Being in the festival would not change anything,” senior Brian Angeliu said. “I would still be working as hard as I can here because people here deserve to hear a good show as much as the people down at state.”

Putting together this show has taken a lot of work from the students involved. For weeks leading up to their first performance, they were staying after school for hours in order to make it the best that it could be. Spending so much time together has caused them to form close relationships as a group.

“My favorite part of the experience has been working with the people,” Angeliu said. “The whole community we have in tech is great. My friends are there, so it’s a good time to spend with them.”

As the latest addition to a long line of plays performed at BG, “Peter and the Starcatcher” again shows the amazing work that the theatre program can do. Just like the main character, the work they have done never grows old.

“It’s funny, it’s unique, you won’t ever see another show like this,” Wells said. “This is a show based on a classic that will feel familiar and unfamiliar. It’s a show for all ages, and a really great way to spend a couple of hours in the theater.”