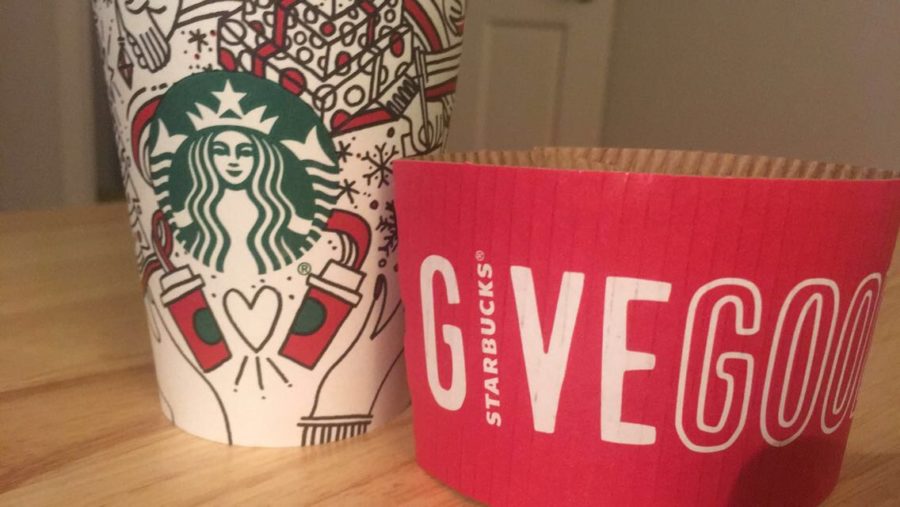 Starbucks’ 2017 holiday season has been marked with ads featuring diverse characters drinking seasonal drinks in a 20-year long tradition of decorative winter cups. Two years ago, Starbucks elicited controversy by coming out with plain red cups without any sort of definitive Christmas imagery. This year, Starbucks has returned with black and white cups, decorated with Christmas trees, doves and gifts.

“Starbucks is a business that does work with a lot of artists,” senior Kathleen Oku said. “Their company does have a tradition of art and while they had gone through the politically correct phase with that art, they may have gone back to what they’ve done best.”

Part of the controversy surrounding Starbuck’s cups has been the balance between having a holiday themed cup and the understanding that some people may not celebrate the holiday season. While the 2015 plain red cups were made to be interpreted by the consumer, they lacked a literal design. The 2017 cups may hold the opposite effect.

“With the various religious backgrounds in the US, some people might feel uncomfortable getting a cup with Christmas designs if they don’t believe in it,” senior Alec Lafrance said.

The benefits of a more holiday–esque cup may be that customers get more enthusiastic for the Starbucks’ holiday season. On the other hand, the use of primarily Christmas imagery could agitate groups who may not celebrate the holiday.

“The designs can entice people into buying the coffee to see what cups they will get, but the drawback is that some people might not like it,” Lafrance said. “It can push a certain group away but it can also pull another group in.”

While the reason as to why Starbucks chooses to design the cups may be unclear, the conversation about the company has increased with 364,000 articles appearing in a Google search for “starbucks holiday cup.” The heightened attention on Starbucks cups post-2015 may even contribute to a 12% rise in revenue during the winter because customers are curious about what they are going to do.

“The consumer is the market of Starbucks so the company does have a responsibility to cater to that group,” biology teacher Nancy Conlin said. “The risk comes when seeing what plays out when you create controversy within that group.”

Though Starbucks holiday cups can teeter between controversy and being a non-issue, the discussion surrounding the cups can be thought to overshadow other issues in the coffee industry like fair trade or the salaries of overseas workers.

“Our culture is so materialistic and Starbucks is a part of that consumer culture,” Oku said. “That means we see our domestic social issues in relation to that culture is put on a platform that we see over other issues like overseas fair trade.”

With the 2015 controversy surrounding the red cups, Starbucks made its purpose clear through a media statement encouraging customers to use the blank space of the cup to design their own stories. This year, Starbucks has marketed the theme of “giving back” through their cups– the largest motif on the cups being a picture of two hands, interlinked with a heart in between.

The 2017 cup’s black and white design is intended to be colored in by customers, to insert color into their own lives and others’, to go along with the theme. While that color may no longer be red for Starbucks, the company’s holiday cup decision may encourage customers to not only give back to others, but understand their perspectives.

“When I first glanced at the Starbucks cup, my first thought was about how festive it was, rather than thinking about how much of a statement it was,” Conlin said. “Yet, it looks fun to me because my symbols were represented, and for someone of another religion, it could just be one more thing added onto a list of discrimination. Starbucks just has to be careful with their practice.”