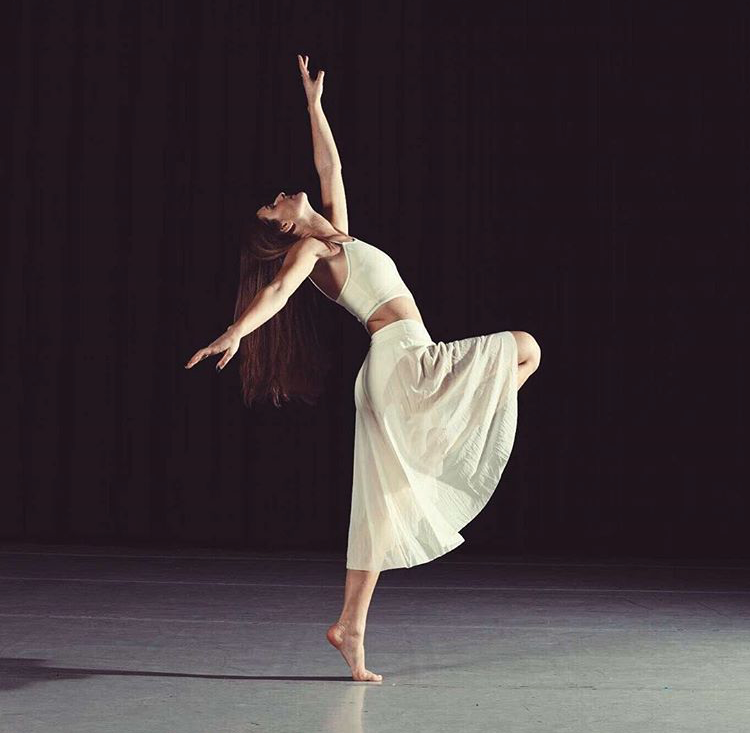 Each year, Orchesis dedicates vast amounts of timing to planning the intricacies of its show, a large portion of which goes unseen as its behind the scenes work. With all of the show’s elements, ranging from perfecting student choreographed dances to ensuring all the pieces of the show fit the theme, show season can be incredibly busy for the dancers.

The performances were held on Feb. 8 and 9 at 7 p.m. and on Feb. 10 at 7:30 p.m.. This year, the show’s theme is “allure,” which means the quality of being mysteriously fascinating. The theme is chosen by senior dancers and is typically one word they believe represents that year’s team and experiences. The show’s dances, dance names and costumes all tend to relate to the word. This year’s colors are plum, burnt orange and white.

“We sort of strayed away from a typical theme this year,” student director Jamie Wahout said. “It’s sort of vague so we can relate it to anything we want. It definitely gives more creative freedom to pick the colors and styles we want.”

Show week is usually in March, but due to the new school year schedule it is a monty earlier this year. This means Orchesis began the show season earlier, which according to coach Michelle Carrison, has been a somewhat stressful adjustment. The group has had less time to prepare for show, and since this is the first time they’ve been on this schedule, they’re adjusting as they go along.

“It’s definitely different because we took the two weeks off for winter break,” Carrison said. “Coming back we had less time to ease in. When we move to the stage we have to spend time respacing, and we had to go right into that after break which we’ve never done before.”

Preparation for the show started in October when Orchesis members auditioned their own dances for the show. Anyone who has been on Orchesis for at least one year is required to audition a dance. The student directors, seniors Wahout and Ally Burhop, assistant student directors, seniors Kathleen Oku and Caroline Hendler, along with Carrison then choose which will make the cut for show. Roughly 18 dances audition and 11 are chosen. Throughout the year, the student choreographers are in charge of teaching the dance to the rest of the group.

In addition to student choreographed dances, the team also works with guest choreographers from studios in Chicago, Carrison will choreograph the senior dance and assistant director Hannah Vaselaney choreographed the opening dance. Orchesis is also continuing with Adagio this year, the dance that includes male dancers as well.

After the dances are chosen, the dancers work to perfect them. They spend eighth period each day practicing and also often carry on rehearsing after school hours. Adagio rehearsals are typically Thursday nights and sometimes on weekends as well. Each dancer is typically in six to 13 dances with Carrison deciding who dances in what.

“Carrison observes everybody’s movement qualities the most so she knows which people have their strengths in what styles,” Wahout said. “She’ll put people in dances she thinks they’re strongest in.”

While preparing for show week Orchesis has been involved in other events as well. They hosted their annual tea party fundraiser on Jan. 21. The event is a winter wonderland themed tea party for young kids from the local area to come and do arts and crafts with the team and Orchesis performs for them as well.

Orchesis is also looking forward to the State showcase. Carrison will pick two student choreographed dances to audition for State, and if they qualify, the dancers will perform at the showcase in May. Then it’s on to Spotlight, which the juniors will choreograph the dance for as practice, and then finally Mini Concert.

“We all have a really good time together this year,” junior Jenna Stasik said. “It’s a unified team, we’re really strong together and have fun. It’ll be different without the seniors next year since every year I’ve been on Orchesis they’ve been there, too.”

Although Orchesis members faced some unexpected challenges due to the new schedule this year, their show is still coming together. The theme has allowed them more room to explore their art and continue to refine their craft as they practice as a group.“The teamwork and collaboration efforts are stronger than they’re ever been before,” Wahout said. “All my years on orchesis I’ve never seen a team be so close; we treat each other like family.”