Floro flourishes as only senior on Girls Basketball 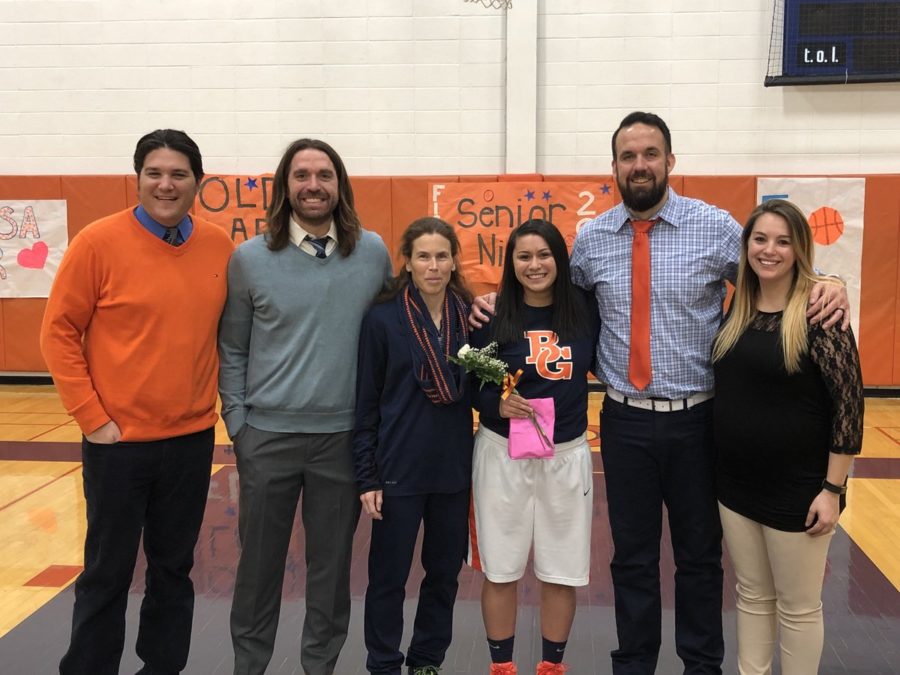 Typically, the majority of sports on a varsity team are held by senior athletes. But, this year the  Girls Basketball team has only one senior: Alyssa Floro. A four year member of the basketball program, Floro has begun to adapt to her new role on the team.

“At first it was difficult being a vocal leader, because I naturally lead by example,” Floro said. “But this year I had to step out of my comfort zone, being the only senior, and lead the team, Overall the experience has been something I’m glad I was involved in.”

Varsity Head Coach Stephen Kolodziej has noticed Floro’s positive influence on the younger players and how it has helped the younger players. According to Floro she  always gives pep talks in the locker room before games. It seems to help pump everyone up and get teammates  focused. Floro tries to give everyone confidence so they can come out stronger together.

“Alyssa has been a great leader by example for our young kids,” Kolodziej said.

“She plays extremely hard, does all the right things, and pushes the younger kids to perform each and every day.”

Being the main role model on a team can be a humbling experience. Floro is one of those players that has become a teacher to the younger players. Floro is a main focal point at practice. During practices Floro tries to be loud and communicate which usually helps keep people moving. Also, if the team seems to be having an off day she will  pull everyone together during a water break and get everyone focused and ready to play again.

“It’s different being the oldest one and having all your teammates look up to you and look to you for advice,” Floro said.  “I’ve been used to leaning on the past seniors but this year I had to step up and be there for my team.”

Sophomore Kendra Lee has appreciated  everything Floro has done for the team. According to Lee she, strives to teach teammates,a trait that was given  to her by Floro. Floro has taught Lee how to encourage teammates, to never give up no matter the circumstance, Lee is grateful to have Alyssa has not only a teammate, but a friend.

“She always does what is best for the team and never puts herself first,” Lee said. “She constantly works hard and leads our team by example.”

Being the only senior on the team meant Floro also  had to change certain parts of her game on the court as well. Floro  has moved from playing point guard to shooting guard and embraced the change.  Most games, she guards the opponent’s best player as well. Floro’s role during the games is to bring everyone together during free throws or out of bounds plays to calm everyone down and regroup. Floro also needs to be  a great communicator on the floor to help the  younger teammates out.

“Alyssa means so much to all of us,”  Lee said. “She is kind of like a big sister, Not only is she hardworking and competitive on the court, but off the court she is just a genuinely caring person.”