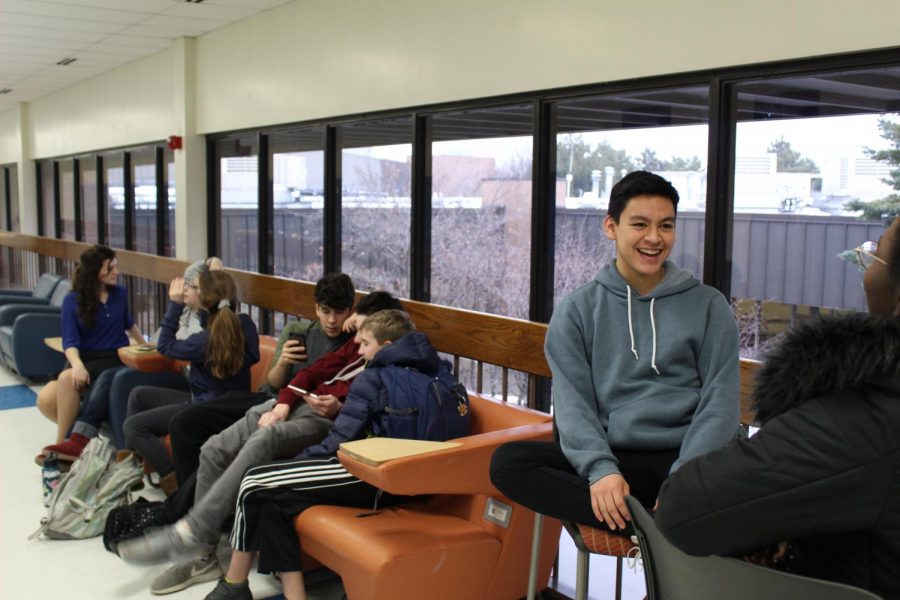 Before winter break, all of the loft furniture was removed from the loft area and placed in the hallway near the social science classrooms. Most students and teachers probably assumed it was going to be washed or the janitors were going to shampoo the carpet. Two weeks later, however, second semester began and the furniture remains in the exact same spot. According to school resource Officer Adams, this was a disciplinary decision that was made as a result of student behavior and destruction. Additionally, the new area provides more space and access to windows to the courtyard.

“I feel like they did it for a safety purpose or students abused it,” senior Emily Miksta said. “People would sit there and not do their own work. I feel people would ditch their classes and go sit in the loft.”

According to Adams, students that were getting help from their teachers in that area reported that the area was too disruptive and they couldn’t focus properly. Many students throughout the day were not following the assigned rules for the area, such as keeping the area clean and keeping the noise level down.

“It’s kind of indicative of the behavior that we saw in the theater foyer,” Adams said. “There’s a lot of people not respecting the freedoms that the school was allowing for them.”

By moving the furniture out to the main hallway upstairs, it has provided students with a larger space to work on homework and relax, as well as provide students with a brighter space with larger windows. With the hallway having more open space, it has fostered more transparency and accountability.

According to Adams, there were also a lot of students that weren’t sitting in the provided seating, rather, students would be blocking both sides of the hallway by laying on the floor. In addition to being a frustrating obstacle for students and staff attempting to walk by, this was also a clear fire hazard.

Students used the loft for multiple purposes, including to study, to have quiet meetings with their friends or to just decompress. According to Miksta, she used it during her blended classes to get homework done and before school to socialize with friends.

“I mostly used it when I wanted time alone or to have a good study session,” junior Ellisa “EJ” Johnson said.

According to Johnson, with the furniture now in the main hallway, the loft has lost its unique trait that made it different from every other place in the building: it was secluded.

“Because it was secluded it was quiet, but in the main hallway, classes have mini field trips there, like during science labs, and it almost contradicts its purpose,” Johnson said.

After finding cheeseburgers with buns taken off shoved underneath the cushions of the seating in the loft, the decision was also clearly a move to keep furniture clean and sanitary.

With this being the case, students have had mixed feelings about administration moving the furniture. While some students liked the idea of more space and lighting, other students didn’t think this was a necessary change, but most were just surprised to see the moved furniture without notification to the student body.

“There is no reason for the administration to tell us about the relocation, but I think people would have appreciated going into school that the furniture was going to be moved because that’s where people sit,” Miksta said.

According to Miksta, it will take some time getting used to this new set-up because people are not good with change no matter the reason. It’s unfortunate students that did not contribute to the bad behavior and used the loft for its intended purpose are being punished as well because of the ongoing incidents that have occurred throughout the school year.

“Unfortunately in situations like this, you have to err on the side of caution so then the people that actually do want to use the area as intended, they get punished as well,” Adams said. “It’s a lesson everyone has to learn because certain people can’t follow the rules.”