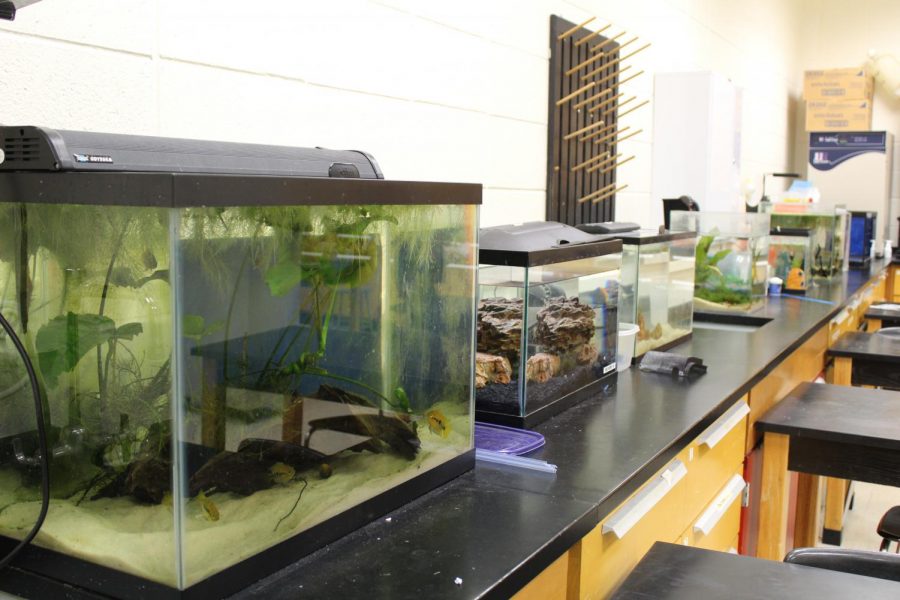 Aquariums and marine animal amusement parks like SeaWorld are home to approximately 800,000 animals according to the Association of Zoos and Aquariums. Places like these may have many positives for animals because they preserve the animal from going extinct and help the animal live in a safe and secure environment. Though the positives are there, some places are mistreating these animals.

According to the Wildlife Rescue and Rehabilitation Organization, the trend of mistreatment of animals is commonly seen with those used for entertainment. When marine animals like dolphins and orcas are placed in confinement, many show signs of deprived normal social and environmental interaction.

Science teacher and Aquarium club sponsor, Rich Schram said that if you’re going to keep an animal in captivity, success shouldn’t be measured on whether the animal dies or not. If there are clear signs of stress on the animal, that’s when you run into some issues. To make sure the animals are in good condition, it’s important to realize factors like what volume of water they should be kept in and their nutritional requirements.

“SeaWorld wasn’t opened with the idea that we want to make orcas miserable,” Schram said. “They tried to make their orcas have as pleasant as an existence as possible but the problem was they just couldn’t get to the point where it was pleasant enough.”

According to National Geographic, orcas are one of the many animals that don’t do well in captivity. A National Geographic article published on March 25, 2019 talks about an orca named Kayla who was kept in captivity at SeaWorld and was used for entertainment. She lived up to her thirties as opposed to the wild where orcas usually live up to fifty.

“I think the entertainment aspect draws attention to the species, but it doesn’t necessarily show how they are in the natural world,” Schram said.

Science teacher Scott Kopecky said that as much as these places try to make the environment natural, it will never be 100 percent the same thing. According to Kopecky, most major zoos have tried to emulate as perfect of an environment as possible for the animals there. But the flipside of that is there are independent zoos, private zoos and petting zoos that don’t follow the same regiment.

“Obviously, if they’re mistreating the animals, keeping them in cages and not giving them exercise, then [everybody knows] that’s not good,” Kopecky said.

According to sophomore and animal lover Jerlene Serrano, some places aren’t ideal for animals because of their sanctuaries and that they are taken away from their families, this can cause them to act up and become more aggressive.

“I don’t think the places [zoos and aquariums] are good because the animals need a bigger enclosure that is more like their natural habitat,” Serrano said.

Although no zoo or aquarium will represent an animal’s natural environment exactly, many zoos are transitioning towards trying to make it as close to the animals’ natural habitat as possible. According to the Los Angeles Times, zoos including the San Diego Zoo and the  Kansas City Zoo have already started making the changes for a more natural and realistic environment.

“I hope that more zoos make these changes so that they can be close to their natural habitat ,” Serrano said.

Living situations for animals and marine animals play a valuable factor in their health. According to the PBS Learning Media, it’s important to keep track of providing for their basic needs so they can live a long and happy life.

“I think people need to use biology and science to have the environment and health be as closely representative of how it is in the wild,” Kopecky said.