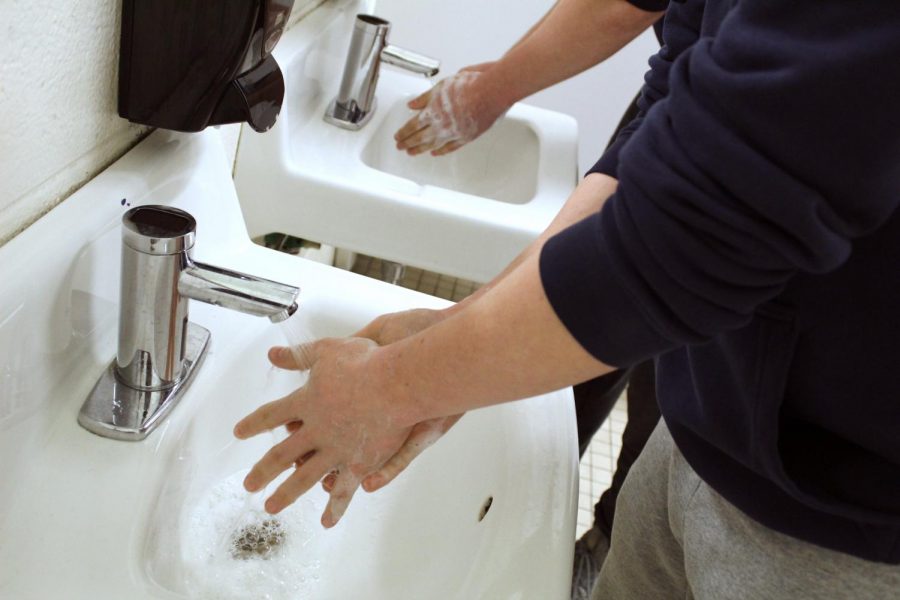 COVID-19, popularly referred to as the CoronaVirus, was first identified on Dec. 31. By Mar. 2, there were 92,000 confirmed cases worldwide, according to AlJazeera. The disease has rapidly spread since it originated in Wuhan, China, with cases popping up all over the world.

Coronaviruses are a family of respiratory viruses and are typically spread through person-to-person contact, meaning one person has been in bodily contact with someone who has had the disease. Although it is technically possible to contract the virus after touching a contaminated surface and then touching one’s face or mouth, this is a relatively rare situation and the virus is easily wiped away by household sanitizers and cleaners. If someone is diagnosed with COVID-19, they are placed in quarantine for the duration of the disease, usually lasting 14 days.

Those infected have reported symptoms such as coughs, fevers and difficulty breathing, along with pneumonia, kidney failure and death in severe cases. In comparison to high-profile pandemics from the past few years, such as Ebola, COVID-19 has a relatively low fatality rate. According to the World Health Organization, the data shows that only roughly 2.3% of those in China with the disease ultimately die from it.

“There should be greater concern for those who are elderly, young children or those with weakened immune systems because they are most at risk for death by the virus, but they are most at risk for any disease,” senior Alannah Rodrigues said. “Nonetheless, everyone should be more cautious and try to avoid contracting or spreading the virus in order to protect those at risk.”

Although it has not been officially declared a pandemic, the WHO has warned that countries should be in a “phase of preparedness” in case the situation gets worse. Cases of the disease have popped up in 35 countries, most predominantly in South Korea, Iran, Japan, Italy and China. Viruses don’t care about country borders, meaning there has been  a large international response.

According to The Hill, the U.S. government has pledged $2.5 billion towards addressing the situation, and according to ABC, the United Nations has quickly mobilized resources and personnel to treat the outbreak.

“Even if you don’t regularly do business with a country, it’s in your benefit to help them solve these sorts of issues because it could end up in your country at some point,” Biology teacher Sindi Smith said. “Internationally, in these scenarios, I feel like we need to help whoever needs it because, in turn, we’re helping ourselves.”

Currently, there are no outright “travel bans” for any country because of COVID-19, but due to the high risk of the transmission in certain countries, the CDC has listed four countries, China, Iran, Italy and South Korea as being at a Level 3 Travel Health Notice, urging as U.S. citizens to avoid all nonessential travel to these countries and recommends that anyone who has recently been in these countries to stay at home and away from others for 14 days.

For BG students who were hoping to travel internationally this spring, the district has requested that all foreign travel is reported to the administration and that students don’t attend school for 14 days if they have visited or had a stopover in a country with a Level 3 Travel Notice. Additionally, they have cancelled all foreign trips that were being run through the district during the upcoming spring break.

But this virus isn’t only present internationally. According to the New York Times, there have been 152 confirmed cases of COVID-19 in the U.S. and 11 people have died as a result. Although this has not yet transformed into a full scale outbreak in the U.S, the House of Representatives has already voted to dedicate $8.3 billion to contain the disease domestically, according to Politico.

At a local level, there have been four coronavirus patients in Illinois, along with a nearby scare. On Mar. 2, District 25 superintendent Lori Bein informed parents and staff that two staff members and their children were potentially exposed to the virus and they attend or work at Dryden, Ivy Hill, Greenbrier and Olive Mary Stitt elementary schools in Arlington Heights. Additionally, a patient at Northwest Community Hospital in Arlington Heights was confirmed to have the virus and is currently in isolation and receiving treatment at the hospital.

“It did make me realize how widespread the situation is because the Arlington Heights patient had not travelled recently, so the likelihood is that many others in the Chicagoland area have the virus, [they] just aren’t showing symptoms or are just showing cold symptoms,” Rodrigues said.

Despite the amount of media attention given to the topic, there are still a lot of unknowns surrounding the topic. For example, it’s still unclear how long the incubation period is, if people can be contagious without symptoms and what the long term effects the disease will have for those who survive the initial stage of illness. Scientists are also racing to develop a vaccine for this coronavirus, since there is no known treatment. With so many questions still unanswered, it’s easy for fear and hysteria to develop around the topic. For example, face masks have been selling out across the world, leading to a shortage for medical professionals, despite the CDC advising that face masks won’t stop the spread of infection.

“People are concerned, but I think people also understand that when something gets this high profile, the government does everything it can to prevent this,” chemistry teacher Andy Park said. “The likelihood of it spreading it transcontinental over here without restrictions is, I think, fairly low.”

As a result of how rapidly the virus has spread since it was first identified, there is no vaccine to prevent the spread of the disease. Currently, the CDC is recommending hand washing and avoiding contact with anyone who is sick, the same standard advice used to prevent the spread of any respiratory disease. Due caution should be used to avoid infections from any illness, coronaviruses or otherwise.

“If anything else, it might serve as a reminder to us to be more hygienic at home,” Park said. “Whether or not the virus has a realistic chance of coming over, it’s a reminder to wash your hands and simple things to prevent a general transmission of disease.”

Every day, the situation surrounding the COVID-19 outbreak is rapidly evolving. Scientists and government personnel are working around the clock to save lives and find a treatment for the thousands who have been infected by disease. For those of us in the United States, the only thing to do is to sit back and wait as the international medical community does their jobs and to remain aware of developments.

“Just having more information allows you to better prepare for the future,” Smith said. “We’ve seen viruses like this that are in the same family of viruses. With that information, I think the response can be a lot faster. There are definite benefits to just having that base knowledge that allows you to react a little faster.”