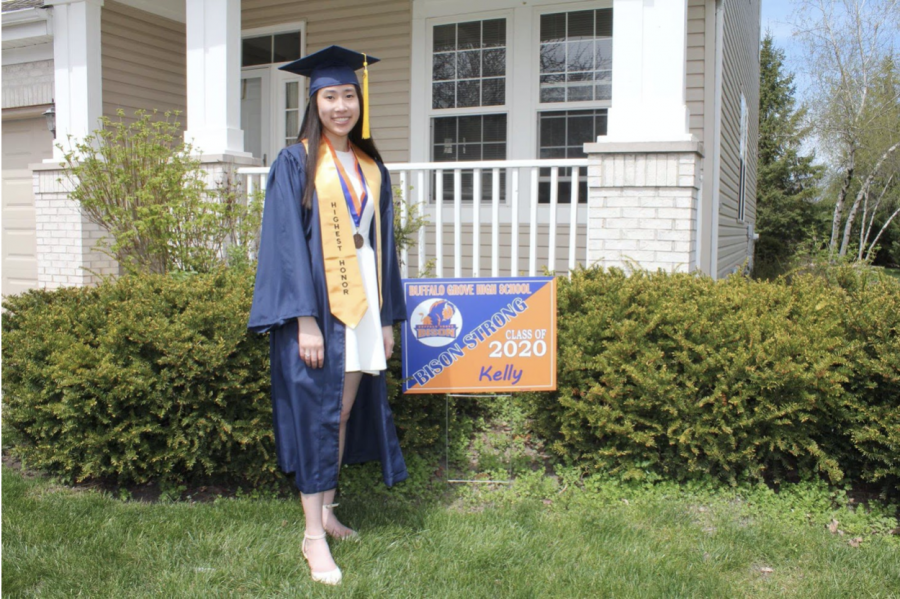 To any other seniors who attended Ivy Hill Elementary School in fifth grade, you may remember that we already celebrated our graduation. That year, our fifth grade show, which was written entirely by our classmates, was set at our imagined high school graduation, where we came back together to dance and sing about the working world that was waiting for us after we crossed that stage and received our diplomas. We never could have imagined that our actual graduation would have no musical numbers, and would instead take place entirely virtually. As we close out the year online, seniors have been forced to look back on our four years of high school without the closure that would come with a graduation.

“No other senior class in the history of American schooling has finished a school year like this and had to try to figure out different ways to culminate a twelve or thirteen year journey of education with their own community,” principal Jeff Wardle said.

The graduation ceremony will still take place at the originally planned date, May 20, but won’t be held in the gym as usual. Instead, a virtual ceremony will be livestreamed so students and their families can watch the ceremony from home.

“It does not look like we have any chance of getting together with 2000 people or more, even over the summer,” Wardle said. “As we saw the state heading there, we decided that this might be our only change to get all 500 of our seniors together at one time and one place and have everyone participate.”

According to Wardle, the district has hired the outside company Bottle Rocket Media to produce the ceremony. Although many of the typical elements of the graduation ceremony can’t occur because of social distancing measures, the district and the media company is using this as an opportunity to include components that make the event unique, such as the inclusion of photos and videos sent in by students through a Google Form.

Seniors also had the opportunity to pick up their caps and gowns, along with a few other graduation related items, on May 1. Additionally, they were given a sign with their name on it, reading “Bison Strong” as a way to celebrate completing their senior year.

Of course, there was no way for the graduation ceremony to proceed as originally planned due to the infection risk large crowds pose. In this unprecedented time where thousands of Americans have been infected by COVID-19, millions have lost their jobs and governments and communities have scrambled to respond, in-person graduations aren’t exactly anyone’s top priority. But many students, myself included, still feel disappointed at how abruptly they ended high school.

“When I try to think of high school ending, there’s not really a certain point for that,” senior Rachel Sowa said. “Our last day in school was March 13th, but I don’t really think of that as the last day of school. It just feels like [high school] never really ended.”

In order to give students a better sense of closure, the administration plans on holding a senior reunion at some point in the future to bring the class back together. However, this won’t occur until the pandemic has subsided and it’s become safe to bring together a group of that size, something Wardle doesn’t foresee happening until August at the earliest.

One of the largest consequences of missing the last quarter of senior year is losing so many of the special opportunities that come with celebrating the end of the year. Prom, senior day and senior nights have all been casualties of school closing in response to the COVID-19 pandemic. This is in addition to all of the individual events and activities that were cut short. Graduation is just the tip of the iceberg when it comes to all of the festivities the class of 2020 is missing out on.

“A lot of the opportunities feel like more of a bigger deal when it’s your last time: whether that’s an academic tournament, sports games or even a field trip with classes,” Sosa said. “They just feel more special when you know that it’s your last one.”

But whether our grade gets to celebrate virtually or in-person it doesn’t change the fact that we still graduated. That is something to be proud of. After twelve years of hard work, experience and a whole lot of standardized tests, the senior class has come out on the other side of our journey through the American school system still standing. We formed friendships, developed skills and learned more about who we are. It’s cliche, but class of 2020, we made it.

So, finally, our high school experience comes to a close, not with a bang, but with a whimper. If you’re like me, you’ve been dreaming of graduation since elementary school. For this year’s senior class, it’s an incomparable ceremony during an inconceivable time in history where students have to honor their years of work without being handed a diploma.

“This is an incredibly strong and powerful and forward thinking senior class that sees outside themselves and has had a huge impact on Buffalo Grove High School,” Wardle said. “I’m so grateful to them, but so sad to see this awesome group of seniors did not get to end in the way that would be so fun and exciting, that we had anticipated, but having to think