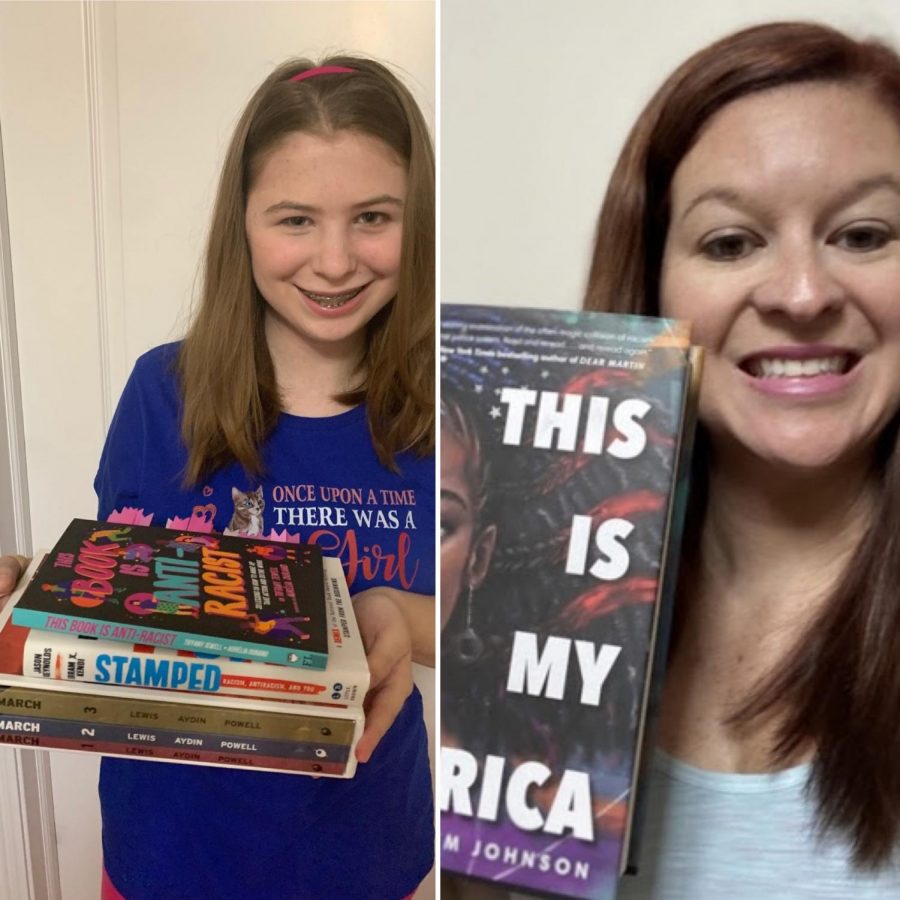 Left: Emily Luethy holds up her stack of antiracist books. Right: Mrs. McCleish displays her copy of "This is My America"

This Book is Anti-Racist by Tiffany Jewell

“This Book is Anti-Racist” is a guide that includes 20 lessons on your path to start advocating for your POC peers. Targeted at the teen audience, it gives steps that young people need to stand up and be empowered to put a stop to racism.

This book is beautiful with the words it speaks, and the images provide factual evidence without exaggerating the point. The book is super colorful and vibrant, which really appealed to me. I highly recommend this book to anyone who needs to start on their journey towards being an anti-racist, as it only comes in around 160 pages.

“Stamped”explains the history of racist ideas, and why it is still in the U.S, today. It shines a light on how we can spread awareness that racism still very much exists, and how we can help put a stop to it. One of the first things that the book says is that it is “not a textbook,” but rather providing information that is still important and relevant in a way young people can understand. The book does an amazing job with gripping your attention, and sustaining it by giving examples of how we can help put a stop to racist beliefs.

McCleish: “But I have to warn you: Scrolling will never be enough. Reposting will never be enough. Hashtagging will never be enough. Because hatred has a way of convincing us that half love is whole. What I mean by that is that we-all of us-have to fight against performance and lead into participation. We have to be participants. Active” – Anyone who knows me knows that I am a huge Jason Reynolds fan. I have met him, heard him speak, and have read almost all his books.  I want to buy at least 10 more copies of this book for my classroom library. I highly recommend this book for adults, too. I truly felt like Reynolds was talking to me and there was so much I learned about racism in America. The book delves into Angela Davis, Fred Hampton, the war on drugs, the moral and religious justifications that people made and still make. This abridged version of Kendi’s original is truly for all young adults and adults across the board. (5 Stars)

The March Graphic Novel Series illustrates the life of civil rights leader John Lewis and how he impacted the lives of African Americans in the United States, from the freedom rider’s movement, to when President Barack Obama was inaugurated.

This graphic novel series is very well done. It does an excellent job of going through a huge timeline, and still provides good enough detail to the things in John Lewis’ life that weren’t as well known as others. I highly recommend this to anyone who needs a lighter story text-wise, while still keeping the heavy context in mind.

This is my America by Kim Johnson

“This is My America” follows Tracey Beaumont whose father is on death row for a crime he didn’t commit. Spending every spare second she has writing to different lawyers begging them to free her father, her family life erupts again when her track star brother, Jamal, who is accused of killing one of his classmates. Desperate to save her family before it’s too late, Tracey questions how America, her America, treats her fellow Black people.

This book is very powerful with the way it’s written, and you can tell that the author used personal experiences to help engage the reader. The topic of racism is the main focus point, but I also really enjoyed how the author had a murder mystery plot line. This let the reader try and guess who really murdered Jamal’s classmate. I highly recommend this, and certainly learned a lot, even through a fictional tale.

McCleish: “When I’m ready, I force myself to study Mama, because I need to learn that strength so I can pass it down, like a family recipe. An heirloom. A curse.” Johnson’s book begins with a daughter intent on contacting Innocence X (think The Innocence Project) to help exonerate her Dad who is only 272 days away from being executed by the death penalty.  Tracy’s journey quickly takes a turn a didn’t expect with the novel intertwining a murder mystery that involves her brother.  Anyone who knows me also knows that I love a good mystery! (It’s kind of my jam). Johnson’s raw depiction of the extreme impact of incarceration on an entire family and the white supremacy that still exists even today was raw and devastating. This is a story that will stay with me for a long time.    (5 Stars)

“The Black Kids” is a story that takes the perspective of Ashley Bennett in 1992. It’s the end of senior year and Ashley and her best friends are spending more time out of the classroom than in. When headlines are flooded with the public beating of Rodney King, suddenly Ashley is no longer just one of the girls, but one of the Black Kids. While everything continues to unravel, she is left to question who is us, and who is them?

I really like how this book covered a real life event that took place in a historical time. It shows that even over 30 years ago, things like police brutality and white supremacy were still a thing, but even more important, that they are still happening NOW.

“I’m Not Dying with You Tonight” takes the reader into the minds of Lena, a Black teenager with a killer sense of style, and a killer boyfriend, who even has a plan for after high school, and Campbell, who is just trying to get the school year at her new school with no plan whatsoever. Their worlds collide when racial prejudice strikes at the Friday night football game, and violence takes over. They are thrown together as they try to walk home, forced to combat their differences and learn how to understand one another.

I really like how this story revolves around a specific short time, as short as one evening. I also loved the conversations this book had, specifically how the two are so different even beyond their cultures, and are forced to get along in a severely dangerous situation. It has surprisingly a large cast of characters, while being so short, and is the perfect book to digest in a couple evenings.