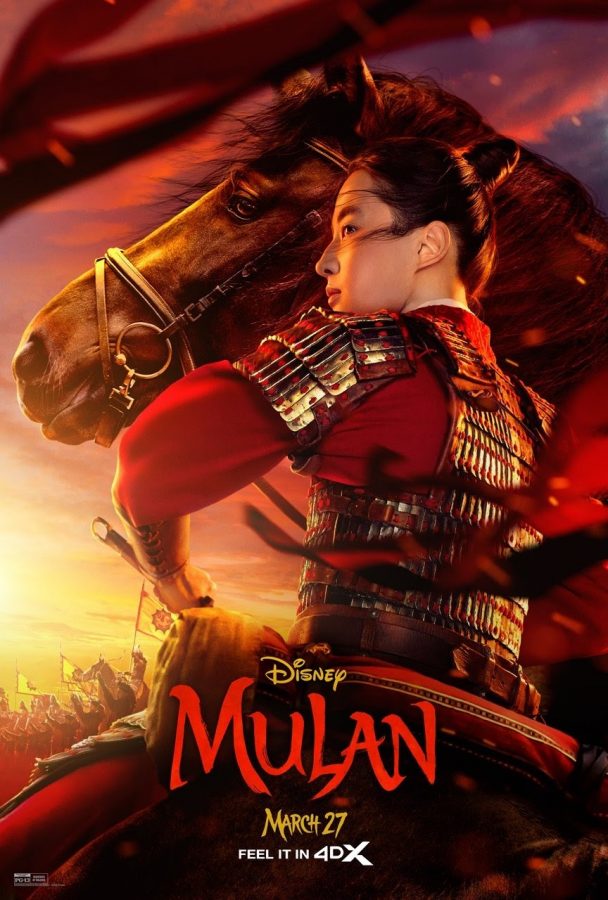 Mulan’s theater release of March 27th was pushed to Sep. 4th, where it was released on Disney+.

Disney continues its charade of live-action remakes with its most recent animated victim, “Mulan.” I think we’ve had enough princess-take-twos to know the live action remakes never quite escape the comparison to the OG animated versions unscathed.

“Mulan” desperately attempts to set itself apart from the beloved 1998 version with a new cinematic soundtrack, new cast of characters and a storyline more historically accurate to the “Ballad of Mulan,” an ancient Chinese poem. Directed by Niki Carlo, the 2020 version of “Mulan” goes without the iconic characters of Mushu, the lucky cricket and Mulan’s romantic interest “Ling,” while dumping a plethora of new characters into the mix.

The villains in particular were rewritten entirely. A group of invaders called the Rourans, led by a man named Bori Khan, fight to invade Imperial China. Alongside the Rourans fights an entirely new character, “Xian Lang” played by Gong Li, who possesses fantastical abilities, including the ability to turn into a falcon—a possible nod to the original. She is motivated by the desire to create an empire that recognizes her as a warrior rather than a witch. I thought she brought a much welcomed depth to the villains of Mulan. Gong Li did a wonderful job portraying an interesting character who echoes the inner conflict of Mulan.

Mulan, played by Liu Yifei, undergoes rather drastic changes, the most noticeable development being her powerful chi, the life force often seen in traditional Chinese religion, philosophy and medicine. Throughout the story she learns to embrace her Chi instead of hiding it, allowing her to par with the most powerful villains in the story. In the original, Mulan becomes a hero through her hard work and bravery. The idea that Mulan’s strength comes from her chi damages the message of the movie, even if it allowed for a couple interesting stunts.

The movie is also devoid of any break out songs, something that I feel wouldn’t have translated comfortably to live action anyway. To fill this void, the movie emphasizes its action scenes. Although they didn’t strike me as anything incredible, I did appreciate the detailed costumes designed by German costume designer Bina Daigler and the breathtaking sets.

Various iconic elements of the original have been tossed for “historical accuracy.” The powerful scene in the original, where Mulan cuts her hair was cut for the remake. As Bina Daigler explains in an interview, “For her to cut her hair off, it would make her look more like a woman than less like a woman in reality.” While I am saddened we won’t get to witness this scene in live action, I get the thinking that went behind this choice. However I find myself rather stumped as to why and how Mulan finds herself with curled blowout by the end of the movie.

Throughout  the movie I found myself distracted by the glaring inconsistencies of Carlo’s “Mulan.” While the movie leaned towards more of an action film, the character of Mulan felt empty and even ridiculous at moments. The original’s message of empowerment was for me, completely lost.