Remembering Ruth Bader Ginsberg and her Fight for Equality 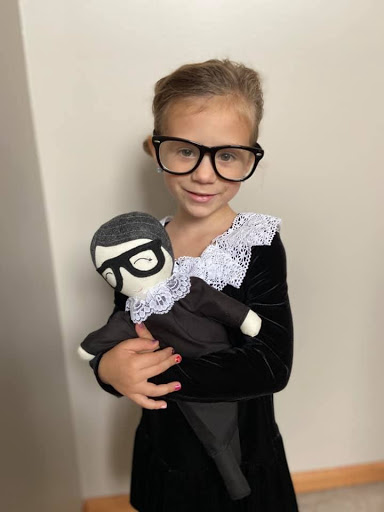 On September 18, 2020 the world learned that Supreme Court Justice Ruth Bader Ginsberg had passed away at age of 87. She represented many marginalized groups throughout her life term. Some examples of the groups she helped are women and the Jewish community.With such an influential stamp on the Supreme Court, her impact has been felt across the country.

“What made her so powerful is that she was someone who was oppressed for so many years and she was then working in one of the highest positions in America,” senior Hannah Greenspan said.

Ginsberg’s career got off to a slow start. Due to her gender, law firms would not hire her. Instead of practicing law, she taught it at Rutgers University. It was there that she got involved with the American Civil Liberties Union, which provided an opportunity to practice law. Some of her most famous cases of that time were when she argued on behalf of males in order to get gender equality for women.

“One case that stuck out the most was the Morrtiz v Commissioner of Internal Revenue,” social science teacher Mary Ryan said. “She argued on behalf of a man who was denied caregiver deduction because he was a man, and in winning that case she won it for women as well.”

After that case, Ginsberg’s career took off, eventually leading her to the Supreme Court in 1993. During her time on the Supreme Court, dissents, meaning someone on the Court disagreeing with the majority opinion, became her trademark. Especially those regarding women’s rights.

One of her most famous dissents was the case of Lilly Ledbetter titled Ledbetter v. Tire & Rubber Co. Ledbetter was suing the company she formerly worked for, because the men were being paid more than she was. Ginsberg was furious that the Court decided that Ledbetter waited too long to sue and wrote a dissent expressing her feelings about the decision.

“What I think is really great about this case in particular is that RBG supported Ms. Ledbetter as she continued to fight,” senior Melissa Gibbs said. “In the end we got the Lilly Ledbetter Fair Pay Act, despite the fact she lost the Supreme Court Case.”

Her work in helping and inspiring individuals goes beyond the court. In 2016, Ginsberg came out with her autobiography “In My Own Words.”

“I think a lot of things that I liked about Ruth Bader Ginsberg were her decisions, and her autobiography gets into the little things about her,” Gibbs said.

Because of what Ginsberg fought for, it is clear that she was a monumental person that many people look up to. Some people have even taken that to the next level and even want to pursue a career in law because of what she has done.

“She’s taken so many steps toward equality, but we aren’t there yet, and I feel like I have to get us there,”Greenspan said.

Although her life has ended, her life’s work has not. Her interpretation of the law and her decisions will resonate with Americans for years to come.

”There was an image she wanted future women to see,” Ryan said. “Her dissents in the last five years on the Supreme Court really weren’t for the present time, but for the future.”