Movies with Mikayla: The adventure of Sherlock’s Sister: “Enola Holmes” 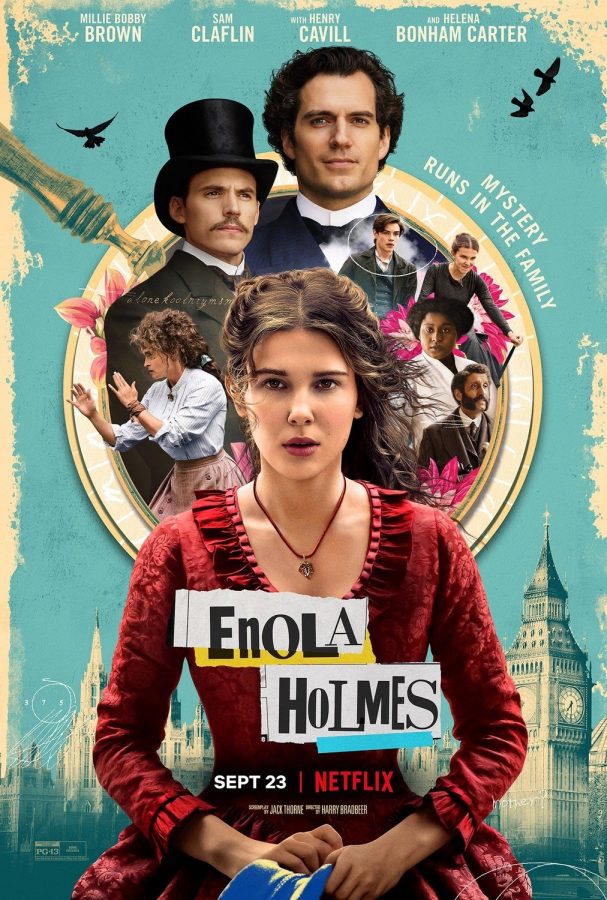 Inspired by the book series “The Enola Holmes Mysteries,” and directed by Harry Bradbeer, “Enola Holms,” introduces a fresh character to the vast world of Sherlock Holms. Actress Millie Bobby Brown plays the intelligent and spirited character of Enola: the younger sister of Sherlock and Mycroft Holms. As Enola navigates her way through mystery and peril she discovers that while her name backwards spells “alone,” she’s not alone in her fight for justice.

The movie is set in the late 19th century, and Oscar-nominated production designer Michael Carlin did a wonderful job balancing a sort of theatrical and realistic style that followed the movie’s overall patchwork creativity.

Brown’s performance as Enola brought the character to life with the continuous breaking of the fourth wall, a cinematic effect that includes a character in the movie addressing the audience. This entertainingly structured the movie’s world building and gave the character an engaging outlet of witty comments, somber reflection and striking questions addressed to the audience. I thought that this aspect of the movie enhanced the flow of the storyline and movie overall, instead of interrupting it.

A prevalent theme throughout “Enola Holmes,” is family. Enola is brought up by her mother in a very secluded environment. Her childhood was prioritized by unconventional values of education, strength and wit. When her life is interrupted by her mother’s disappearance, her two brothers come into her life for the first time in many years. The movie is propelled by her struggles with her brothers as they refuse her help in her mother’s case. Threatened by enrollment in a boarding school, and unwilling to succumb to society’s ideal “lady,” Enola runs away to solve the mystery herself. However the conflict with her brothers consumes too much time in the movie, taking away the spotlight from which Holmes this movie is supposed to be about.

One thing that felt a little odd to me was the story’s quick shift from the missing-mother-mystery to the sudden concern of a runaway boy, “Lord Tewksbury,” played by Luise Patdrige. Their friendship plummets Enola into a new mystery and while the movie wraps these two mysteries up very cleanly, it seemed as though there was not enough time to resolve the relationship between Enola and her mother. However, perhaps the blatant lack of resolve between Enola and her family was meant to speak to an independent and thus empowered Enola Holmes, or perhaps simply convey the complexity of family relationships.

One element of the movie’s storyline I have given some thought to is the relationship that develops between Tewksbury and Enola. Although I do not think Tewksbury being Enola’s romantic interest damages the movie’s message of self empowerment, I thought it seemed a bit uncomfortable. Not even in the sense of their relationship being awkward, rather I think “awkward couples” have found their place in cinema, but simply the pacing of it. The moment they find themselves in a relationship is meant to be a shocking scene of sweet epiphany, but instead it felt rather out of place and even insensitive to their situation, and thus awkward.

While the dual mysteries in “Enola Holmes” intertwined a bit too conveniently, and Enola’s brothers contributed pitifully little with their plentiful screen time, the movie, storyline and actors remained engaging for the entirety.