Movies with Mikayla: The Witches 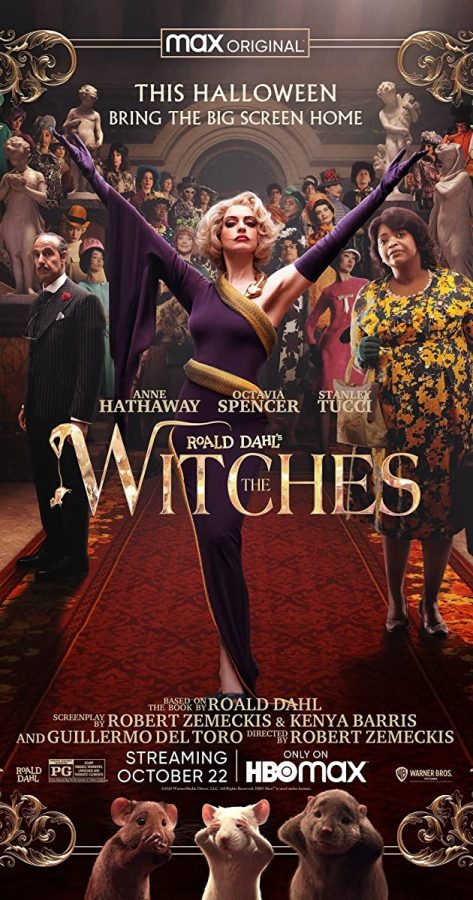 Anne Hathaway strikes as pose in the movie poster for recent film, "The Witches".

Rohd Dahl’s dark fantasy children’s novel, “The Witches,” faces its latest adaptation by American film director Robert Zemeckis. The premise remains familiar: a boy is turned into a mouse as he discovers a society of witches’ nefarious plans to turn all children into mice. Although the movie includes notable acting performances by Octavia Spencer as the grandmother and Anne Hathaway as the Grand High Witch, the story seems to lag and lose the audience in its simple and predictable plot.

The movie opens with a voiceover by Chris Rock, who offers narration throughout the movie as an older version of “the boy,” who remains nameless except when referred to as hero. Throughout the movie, the main character is painfully characterless, with little meaningful dialogue and personality. The voice over quickly becomes overbearing. It took away meaningful time that should have been spent on developing “the boy” as an individual character, not just as “a boy.”

Despite the weak portrait of it’s main character, the movie does, however, play on its strengths. Much screen time is given to Octavia Spencer who does an amazing job of portraying the boy’s loving and encouraging grandmother. Perhaps the movie purposely sweeps past themes of loss and focuses on the witches’ gruesome Venom-like smiles and toeless feet in order to follow the book’s imaginative and carefree fantastical feel. Anne Hathaway also delivers as the Grand High Witch, the comically ruthless and honestly often terrifying convent leader. This (by the book) over the top villain supplies the storyline with conflict and offers the movie an easy and barley cinematic resolve with her rash and careless demeanor.

My favorite scene in the movie would have to be the grandma’s failure at her unmousify potion. The suspense felt ridiculous yet I found it very funny; as magical ingredients of Formula 86 Delayed Action Mouse-maker is mixed with several aromatic flowering plants in a small china cup, as the characters, mouse and human, hold their breath and close their eyes in anticipation, only for cup, glowing with a galaxy of stars, to turn into a coffee brown. The scene ends with the unified conclusion that it has failed and the acceptance of their fate. I thought this scene reveals the fantastical side of Roald Dahl that does not translate to the screen reasonably or easily.

Roald Dahl’s books capture the audience in their own imagination with his engaging creativity.  Zemeckis attempts to deliver Dohl’s crafty and creative writing in “The Witches,” in an effort to stay close to the childhood favorite book, limit the movie and it’s actors. The movie has received an IMBd rating of 4.5/10, I would give it a 4/10.