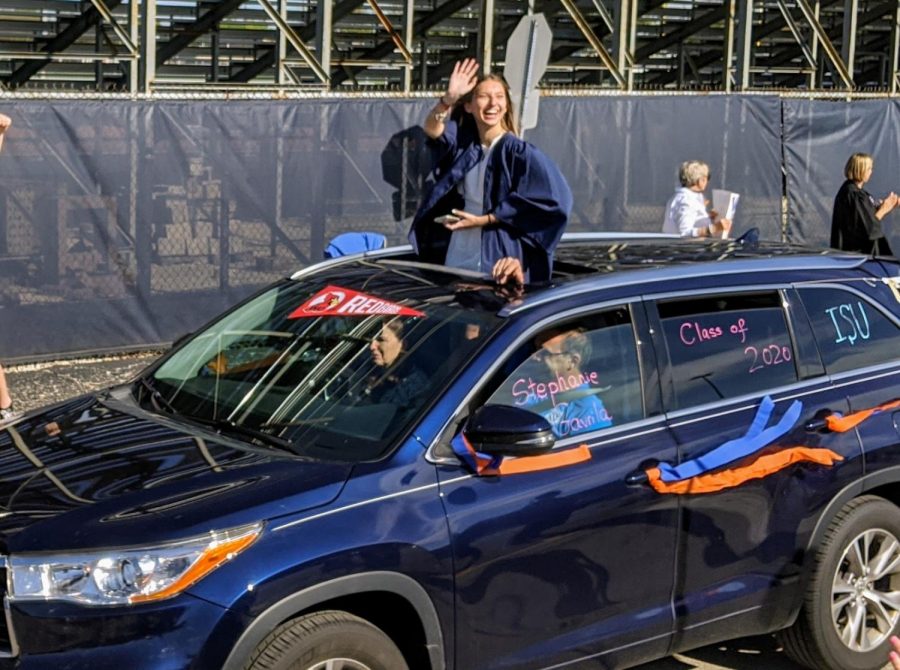 Class of 2020 seniors drive through the parking lot to celebrate graduation while socially distanced.

For most students, high school culminates in a large graduation ceremony at the end of their senior years. Friends and family gather to congratulate recent graduates as they eagerly discuss the next stages of their lives. However, some students follow a less traditional pathway.

“I was already deciding to graduate early before COVID, but I think COVID pushed me to do it,” Tetsusheva said. “Online school was not as engaging, and I could not see my friends. One of the things originally holding me back from graduating early was that I wanted to see my friends, and that is not a factor anymore.”

Tetsusheva is now enrolled as a full-time student at Harper College. She hopes to complete general education requirements before attending a four-year university in the fall. According to Tetsusheva, spending a semester at Harper will provide her with more meaningful credits than the AP courses offered at BG.

“I figured if I went onto community college, I could get even more credits so I could get through college even faster,” Tetsusheva said. “I also had the Harper Promise scholarship, which propelled me to move forward as well.”

Gonzalez plans to spend his next semester working at Pep Boys repairing vehicles. According to Gonzalez, he felt prepared due to previous experience in the field, including automotive courses at BG. This full-time position would have been too time-consuming to manage if he was still a full-time student.

“If I was still in high school, I could not have gotten the job and the head start,” Gonzalez said. “The extra semester has given me time to look more into [my future] and get more knowledge.”

Despite their different pathways, Tetsusheva and Gonzalez have one thing in common: a plan. They both spent months considering their options with their parents and counselors before coming to a decision.

“When students meet with us, we want to make sure they have a plan,” counselor Brian Linhart said. “It could be dangerous to just jump into it, because you get out of the cycle, it is difficult to get back into the flow. A lot of us have experienced that with the pandemic.”

Seniors are able to graduate after their first semester if they have 21 credits and have met a list of requirements including four years of English, a driver’s education course and a fine arts course. According to Brian Linhart, it is important that they communicate with their counselors to manage their courses, stay on track and fill out necessary paperwork on time. Tetsusheva and Gonzalez both came across difficulties during this process but were ultimately able to accomplish their goals.

“It was a long process that I hated,” Gonzalez said. “I’m not a school person—it’s not my thing. I knew I wanted to graduate early for a long time, but I was not able to make it official until the last minute, which was absolute chaos.”

Confidence and determination are important qualities for many high school students, but according to Linhart, they are crucial for those planning to graduate early. It is a difficult process, but having a plan, resilience and support often allow for success.

“I cannot think of a kid who has come up to me wanting to graduate early who has not gone through with it,” Linhart said. “It makes me feel good that they are making an educated choice and have actually thought it through and come up with a plan.”