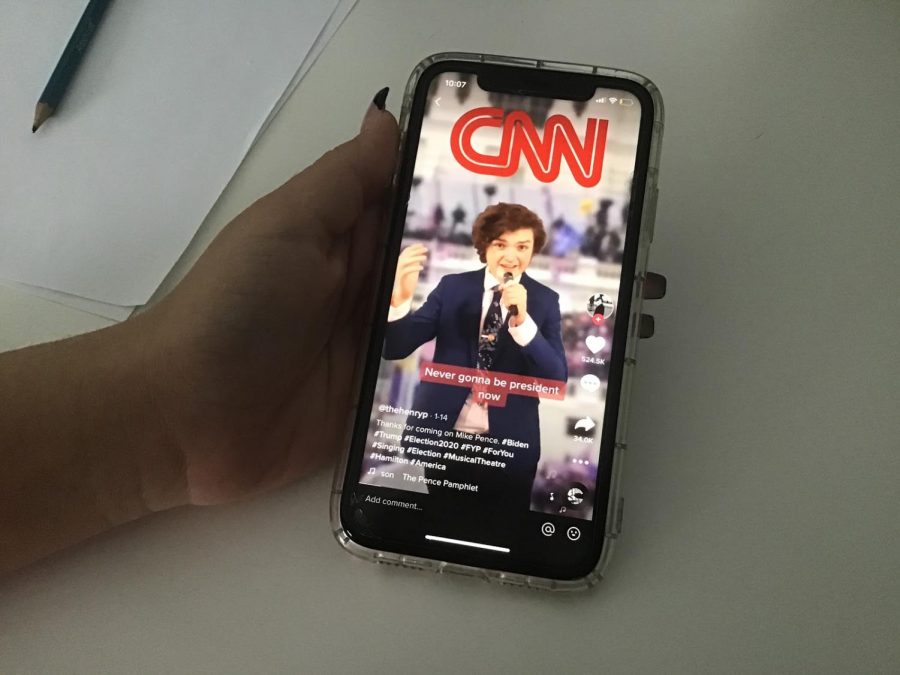 Even Tik Tok is not safe from political echo chamber content, seen here as a user scrolls through the app.

With the recent 2020 election and the inauguration of President Joe Biden, the opposing sides of the Republican and Democratic party have been much more prevalent on social media. Tik Tok and Twitter have been amongst the numerous social media platforms to witness the almost never-ending battle of these two parties. But according to USA Today’s 2019 article “My social media feeds look different from yours and it’s driving political polarization”, our social media networks are creating our own personal reality, of which includes politics, and bases it on what the user likes/dislikes, clicks on and shares.

Though junior Kalia Davis has noticed a political bias in the algorithms in social media, she bases her political opinion on morals, religion and what she sees going on around her.

“The algorithms of social media don’t really affect my stance on the two parties because at the end of the day, I’m going to do my own research and have my own opinion,” Davis said.

In an article titled “The political effects of algorithms: a look at Facebook and Google” by Diggit Magazine in 2019, reaserchers dive into the deep depths of how social media platforms such as Facebook and Google work. The invisible player in the intelligence of social media is what may drive our choices in everyday life. Take Facebook for example where the ‘Top News’ section is based on many different factors that go into accordance with us. These invisible mechanisms influence what a group of people see and expands their knowledge on what they believe to be true instead of providing them with opposing views to challenge them.

“I think we should be able to see both sides of the party system on social media,” Davis said, “Even though we may support different ideas, we should still be able to come together and hear out others who don’t agree with us or see different sides to things.”

This topic doesn’t only apply to social media which is why it’s important to do your own research. Political biases are seen everywhere whether it’s a news channel, business company or the radio. We are constantly being fed into the cycle.

“I think it’s important to see all sides so you can form a well rounded opinion of different matters,” Language teacher Sarah Manos said, “For example, if you only watch CNN or Fox News, the information you see is very one-sided so you believe it to be fact.”

With the increase of younger generations on social media, many kids are getting involved in politics too. Tik Tok is very popular amongst young kids but it’s also another place that has skyrocketed with users under 18 expressing their political opinions. Because of this, kids are already being exposed to a one-sided viewpoint and starting to form their opinions with little knowledge

According to Vox.com, this year’s voter demographic of young people surged as compared to 2016 and the overall age groups have been the highest in over 100 years.

“I think the younger generation is coming up and seeing what the older generation has made of politics and Gen Z doesn’t necessarily agree with the way things have been done,” Manos said.

With the growth of social media usage and the wave of politically driven Gen Z-ers, it’s important to not give into fake news and spend some time doing your own research. A lot of these social networks are only feeding us information we would want to see, not what we need to see.

“Information on social media isn’t always true, therefore it’s not a reliable source,” Kostanyan said. “There are a few things that affect my opinions and social media is not one of them.”