Movies with Mikayla: “The lion the witch and the garage door” 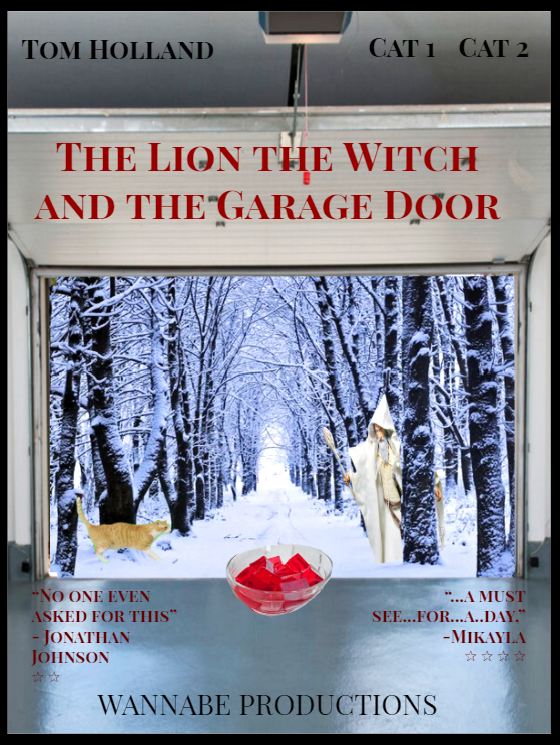 Directed by director Luke Charms, this sci-fi, thriller, romance, comedy, silent film musical has gained attention for its originality and peculiarity. The film follows the story of a boy named Pevensey as he navigates the mythical world of Balarnia in a modern retelling of the childhood classic.

Currently, the film is in the red, having surpassed its budget of half a million dollars by 40 dollars. Charms is also facing multiple lawsuits, including one from his past sponsor “Spelingly.” According to CEO Johnathin Jonson, he had not been told it would be a silent film and the script that the company had helped spell check had been “eaten by one of the cats on set” according to Charm.

But while the movie is more comparable to a sixth grade slideshow, its plot remains mysterious and brimming with depth and meaning. Pevensey, played by actor Tom Holland, travels through the serenic snowy woodlands of Kansas accompanied by a real lion that mysteriously seems to be replaced with an orange cat halfway through the film.

“No, it’s not the Tom Holland, but it is a Tom Holland,” Charms said. “We had his name changed for advertisement purposes. As for the lion and the cat, well I don’t want to talk about it. Oh, and for the people complaining about how we used jello instead of turkish delight? It’s art, suspend your reality just for a moment would you.”

Charms also explained the lack of cast is greatly due to budget limitations. The production team thus opted for CGI characters to include the White Wizard, Mr. Humus and Peter the Magnificent as well as to meet the criteria for 10 different genres for mass appeal. While Charm claims the voice actors did a magnificent job, we really have no way of knowing. The theatrical film score is however available on spotify.

Themes of sacrifice, family, growth, loss, global warming and the importance of never growing up like Susan did, are all prevalent and weaved carefully into the practically non existent plot. And although Charms has said previously the change of “wardrobe” to “garage door” was due to the fact “filming in one of those things would be a nightmare,” the name change has been speculated to be a good move legally.

“The Lion the Witch and the Garage Door,” is by no means a must see. But it’s nice for a rainy day after you’ve completed or given up on that 5,000 piece puzzle and have absolutely nothing else to do. Sometime next, next, next April, a sequel called “The Crispy Prince,” is set to start production as soon as they get the greenlight (from whoever gives the lights).