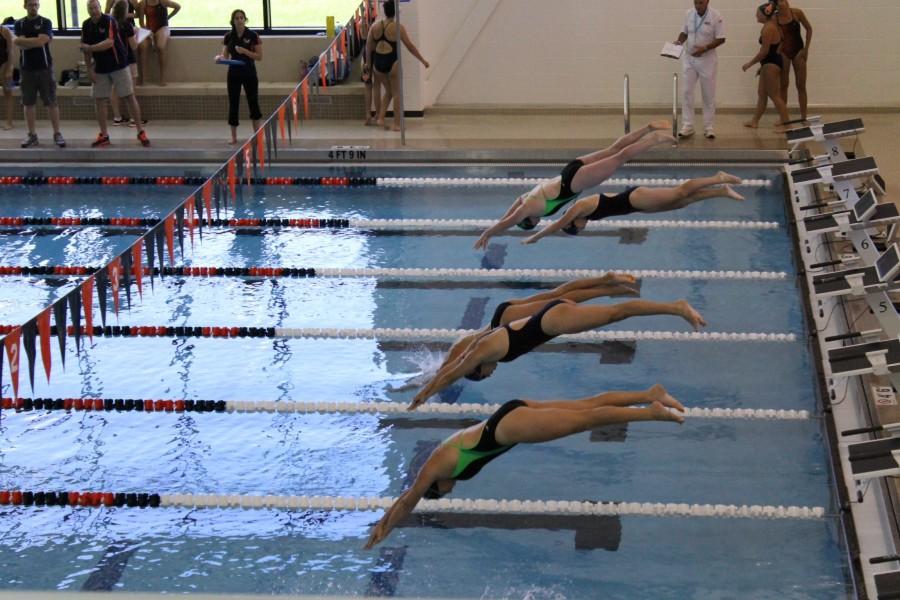 BG girls start off their race at a home meet.

After a long season of swimming in the Elk Grove and Wheeling pools, the girls swim team is back home at the new Nanotorium to dive into the 2014 season.

According to head coach Tom Mroz, though the variety of pools did not affect the team’s overall performance, it did affect recruiting efforts.

“The amount of traveling we had done stopped some returners and freshmen from trying out,” Mroz said. “Those who had joined again from last season were very successful.”

Those who had joined the team last season are relieved to be home after traveling from pool to pool last year.

“It feels great being back at BG this year,” senior Jessi Graziano said. “Moving around from Willow Stream, Elk Grove, Wheeling and Olympic pools was a hassle. We are very lucky to be able to have our new pool this year”

Last year was highlighted by senior Sarah Morosan who represented BG  at the State swim meet. Morosan swam the 50 meter freestyle. Looking forward to this season, Morosan has made her top goal to make it back to the State meet.

“In order to compete at   State  again, I need to stay positive,” Morosan said. “As easy as it is to sit around and put the bare minimum effort in, I’m not going to get any faster.”

Morosan’s teammates also seem very confident that she can go back to State to represent the Bison.

“I think it is absolutely possible to have Sarah qualify again,” Graziano said. “We could possibly have other girls go to State too.”

With the departure of last year’s seniors, Mroz is looking to rebuild with a  young core of players. According to Mroz, the new pool opens the opportunity to freshmen and those who didn’t swim last year to be a part of the team.

“My focus this year is to build a team that will be successful in the future,” Mroz said. “When building this younger team made up of underclassmen they will be put in a mode for competition in the future.”

In building this successful future, Mroz looks to senior captains Morosan and Graziano to prepare the younger swimmers for the future. According to Mroz, the captains are to teach the other swimmers the traditions of the team.

The team has a very strong sense of support for each other. This is seen  in and out of the pool.

“We have made amazing friendships on the team,” Graziano said. “These friendships helps us to compete harder with each other and other teams.”

According to Mroz, every team is tough to compete against due to the individual challenges each presets every week. To be able to defeat these teams they need to have a strong counter attack.

Overall, the new pool has given the team new opportunities for this season. The team seems positive that they will be rewarded.

“We want to use the new pool the best we can,” Graziano said. “With the new facility the possibilities are so much greater.”