Varsity football on the brink of playoffs 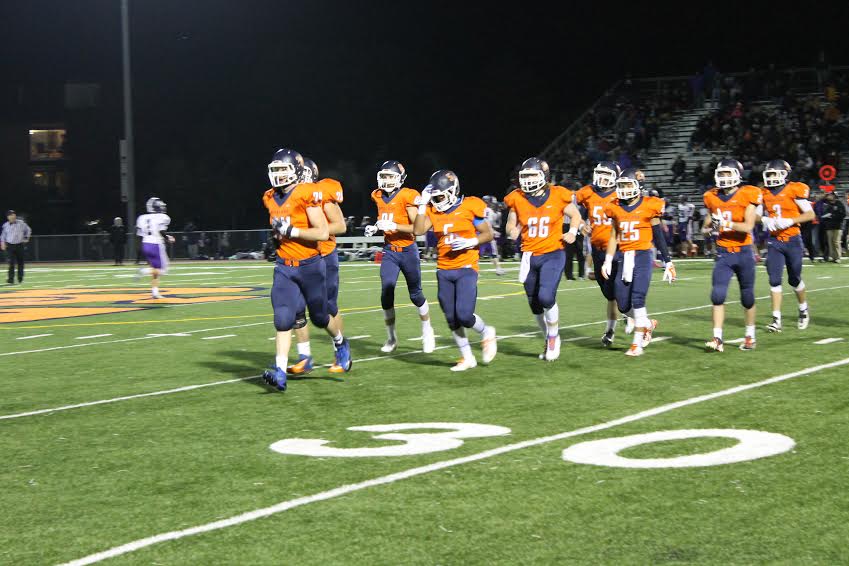 The bison offense hustles to the sidline after a timeout is called in a game vs. Rolling Meadows.

After last seasons record of 2-7, the varsity football team has made a major comeback with a record of 4-4 and third place in the MSL East. Much of the success this season was achieved through the many changes made in between this season and the previous season.
“Over the course of the off season, we have managed to learn from our mistakes and see how we can improve them,” Michael DiMatteo said. “This has allowed us to be more consistent as a team and to compete with the other teams.”
According to senior player Alex Horvat, not only has there been a change in the team’s play, but there has been a new sense of unity throughout the entire team.
“I have noticed this season that our team has become more of a family,” senior Alex Horvat said. “Everybody trusts each other from knowing that the person standing next to you has dedicated the same amount of time to be great.”
The team has had very close victories over Schaumburg (27-21), Elk Grove (21-20) and Hersey (26-19). As stated by DiMatteo, this allows the team to understand that they are always in the game and will fight till the end.
According to senior Ricky Strba, the close wins have further impacted the team as a whole.
“The effort we needed to win those games gives the entire team a surge of energy and confidence when it comes down to the wire,” Strba said.
The deduction of last year’s seniors was difficult for the team, but they managed to pick up some important skills left behind.
“Last year’s seniors really set the table for this year’s seniors,” DiMatteo said. “They set a good work ethic which this year’s seniors have established very well.”
The team will play it’s final game tonight Vs. Wheeling. This is an important game for the team considering that they are right on the playoff bubble.
“We need to have a final record of 6-3 to go into the playoffs,” DiMatteo said. “If we fall short one game and finish with a record of 5-4, we will need to depend on other teams in order to get in.”
The team feels optimistic that they will be able to achieve this goal of continuing into the postseason.
“I believe that we can make the playoffs,” Horvat said. “Our next game we play is winnable and if we win, we’re in.”
As for the future, DiMatteo plans to have the players continue current strategies to keep the team successful.
“We don’t plan on changing much on the way we develop our team,” DiMatteo said. “We want to build off of a core of hardworking freshmen so they can further our success in the future.”