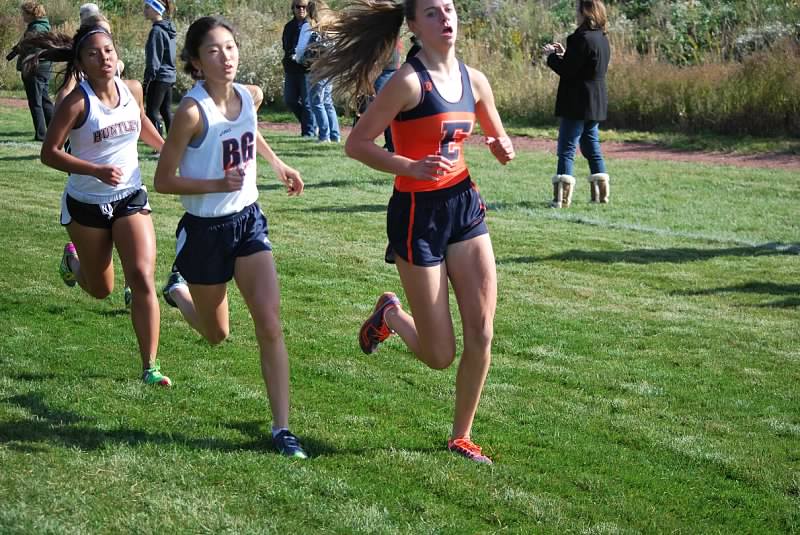 The BG girls cross country team entered a fresh new season after the loss of 15 seniors from last year’s team. Now, a new era of runners will be looked upon to grab the reins and guide the team further than they made it last year. Head Coach Sara Farrell looks at this as an opportunity to make the team better.
“We’ve improved so much over the course of the season,” Farrell said “Our girls are competing very hard, and our best races have yet to come.”
With practices after school every day, the team constantly keeps the same mindset of getting to improve everyday. According to Farrell, an average practice for the team will consist of an 800 meter warmup, followed by dynamic stretching and core and abdominal workouts. Then, the team transitions into different kinds of trainings, such as intervals of long and tempo runs. On Fridays, the team has a pool workout with aqua joggers, which works on the runners leg muscles.
Junior runner Rebecca Rabs feels that practice is a large part of the season for more reasons than talent building.
“Practices are my favorite part of running cross country because we always have fun doing our workouts,” Rabs said. “It’s also a great time to build team chemistry and get to know each other better.”
According to Farrell, one of the top runners for the team, sophomore Natalie Fitch has grown into one of the leaders of the team.
“The team always pushes each other to get better every day,” Fitch said. “That’s why I love this team, we all love each other so much.”
Fitch also sees coach Farrell as a huge part of the teams success this year.
“I love Coach so much, she sees our hard work and she acknowledges it,” Fitch said.
The team has now turned the final corner and is heading for the finish line.
This past weekend, the team ran in the Conference meet, where they were led by junior Kaitlyn Ko, who finished seventh in the varsity race and was awarded All–Conference. The team will now turn its attention to the Regionals meet in Libertyville this weekend, where they hope to place in the top six so they can advance to the Sectional meet.
The team will be focusing on improvement and faster times
“We want to cut down on our times from previous races,” Rabs said. “We hope to make it to Sectionals this year and race our best.”