“The Best of Me” tugs at heartstrings of romance fans everywhere 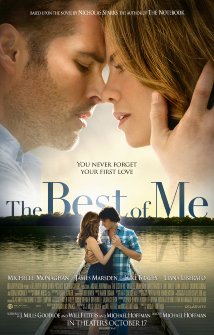 Going into the movie theater, I expected “The Best of Me” to be another beautifully–narrated movie based on a Nicholas Sparks’ novel, and that was exactly what I got. Since I had not read the book prior to watching the movie, I had come in with fresh eyes and an open mind.
“The Best of Me” is told through a series of flashbacks and current– day events. Within the flashbacks, a love story unfolds between two troubled teens, Dawson Cole (Luke Bracey) and little–miss–perfect Amanda Collier (Liana Liberato). The flashbacks are puzzle pieces connecting untold reasons why their fell love apart, leading up to the moment that they reunite 21 years later, at the age of 39 (played by James Mardsen and Michelle Monaghan).
The movie starts out with the two characters, both in their late 30’s, giving the audience a taste of what Amanda and Dawson’s lives were like prior to seeing each other again. They are then brought backtogether by a mutual friend who– in their teen years– had impacted their lives immensely. This mutual friend, Tuck (played by Gerald McRaney), passes away at the age of 92, leaving Amanda and Dawson everything in his will. Without knowing they would be meeting once more, Dawson and Amanda run into each other at Tuck’s house.
What really caught my eye about the movie was how realistic Amanda and Dawson’s teen romance was. Being a teenage girl, I have seen a lot of over–exaggerated love stories, all of which are extremely unrealistic. The story of Amanda and Dawson is a lot like how real teen love is, crazy and unpredictable. The movie stresses the fact that although Amanda and Dawson get into serious disagreements,they still love each other no matter what. This realistic love draws the audience’s attention and tugs at the heart strings.
The movie setting was constructed accordingly to each time period and made the viewer feel like he/she was in the scene. Each actor portrayed his/her role in such a way that the viewer became emotionally attached by the end of the movie. The style of clothing makes each character come to life, and helped with the role each character plays.
Watching this movie, I learned that you should never cease to tell someone you love them because you may never know when you’ll see them again. The love story between Amanda and Dawson is a roller coaster ride that is worth watching. I recommend “The Best of Me” for all those hopeless romantics out there and diehard fans of Nicholas Sparks. “The Best of Me” is a movie that will definitely break your heart, put it back together and then break it into a million pieces again.