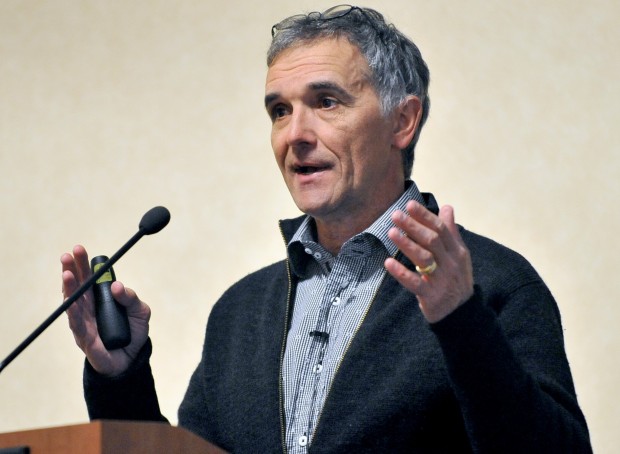 John Underwood, the founder of the Life of an Athlete Project and a former NCAA Al–American track athlete, visited Rolling Meadows High School on Oct. 14th to talk to young athletes, coaches and parents about how a person’s everyday lifestyle can affect his or her performance in sports. Substance abuse coordinator Robert Leece helped configure the event through the organization Link Together and was very excited to bring Underwood to District 214.
“Our committee comes together on a regular basis to discuss ideas of how to guide kids make better decisions in their lives,” Leece said. “We were so thrilled to have Underwood come out and talk to kids about making good decisions.”
After Underwood’s career came to an end at Brockport College in 1982, he devoted his time to studying human performance at the Sport Institute of Finland.
He now specializes in recovery, peak training and lifestyle impact on mental and physical performance. He has trained 28 Olympic athletes, five of whom who have won a medal. He has also worked extensively with the NCAA, NHL, NFL and NBA, as well as Navy Seals conditioning.
“Working with the Navy Seals was the most significant experience I’ve had,” Underwood said. “The things these guys can do is amazing. They’re so much more dedicated than any athlete I’ve ever studied.”
While speaking to approximately 400 people at the event, Underwood spoke of the many different factors that can influence an individual’s performance in a sport. Whether it’s getting a good amount of sleep, having a good diet or even just a positive attitude, every little choice makes a huge difference in an athlete’s performance.
Senior football player Aaron Schubert, who also attended the presentation, learned a lot of information that he believes will help him with his game.
“As an athlete, I found all the information he presented really helpful,” Schubert said, “I knew drugs really affected an athletes performance, but his presentation really showed me the details.”
Underwood also wants to make it clear that it is possible to become a professional athlete, but is required hard work and dedication
“Eight out of 100 kids are physically talented enough to become a professional athlete,” Underwood said. “The kids that make good decisions with their lifestyles are the ones that actually take the next step.”
Underwood makes it his job to take athletes and help them with their goals both in and out of sports.
“It isn’t what you’re willing to give to be successful, it’s what you’re willing to give up,” Underwood said.