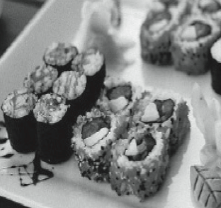 Today, contemporary American culture has become almost entirely submerged in a fast food regime. While finding both a healthy and tasty alternative to the typical grease– filled cuisine isn’t always easily done, there are still other options to turn to aside from those listed at your local McDonald’s drive–thru.

One healthy substitute to convenience food can be found at a small, locally–owned Japanese steak, sushi and seafood house known as Rokbonki. Located in the strip mall near the Kohl’s north of BG, Rokbonki offers a friendly, interactive and mouth–watering culinary experience for the whole family.

Speaking of family, I had decided to deem this food–filled adventure as a great opportunity for a little daddy–daughter time. Upon entering the establishment, my dad and I were almost immediately greeted by a cheery woman who proceeded to ask whether we were there for the sushi bar only, or the steak and seafood house— as there was different seating for each. Wanting to experience the entirety of the restaurant, we were seated in the steak and seafood house section.

One interesting aspect of Rokbonki, which hit me as soon as I was seated, was that all seating consisted of two to three families sharing one table. The tables were fairly large in size, so spacing was, of course, no big deal. However, it was still slightly odd to see completely random groups of people being seated together.

My dad and I had been placed at one end of a table, with another family at the opposite end. While I had initially thought that this would be awkward and slightly unappealing, I progressively warmed up to everyone sitting with me, which made for quite a fun and interactive atmosphere.

The overall ambiance of the restaurant buzzed with laughter and chatter, which only escalated once the chefs had come out to cook for us.

The dining area was tastefully laid out in the classic Asian style of Teppanyaki, meaning that it was set up so that everything could be cooked directly in front of you. This single detail had managed to make my dining experience all the more enticing before I had even had a single bite of food.

The decor, on the other hand, wasn’t anything special. Each table was neatly–situated next to a large griddle top, along with a small opening in the ceiling which allowed for any accumulated smoke from the cooking to filter out. This is something that you’d expect to see at your typical Benihana sushi restaurant.

The main ingredient of either shrimp tempura or unagi (eel). One other refreshing characteristic of this dish was that it was an inside–out roll. This means that the seaweed wrap holding together the roll, which many find to be a little less than aesthetically pleasing, is hidden behind a layer of white rice. The center consisted of cucumber and fried eel, flavorfully draped with a spicy–sweet sauce, making it both rich in flavor and appearance.

Sliced avocado was applied to the surface of the roll, resembling the scales of a dragon, while the outside layer of rice was decorated with tobiko— tiny orange, pearl–like structures of flying fish roe. Tobiko is, in essence, colorful caviar, which surprisingly had no fishy taste at all. It simply added a crunchy and salty aspect to the dish, along with a satisfying artistic flair.

Each bite of sushi was a sweet, tangy explosion of complex flavors. While certain tastes, including those of avocado and cucumber, were familiar and comforting, others were more diverse, which was exceptionally invigorating. For instance, the pairing of the mushroom–like texture of unagi and the crunch of the shrimp tempura made for a uniquely–balanced taste within each bite.

The side of gyoza that I had ordered was every bit as good as the sushi. It wasn’t anything more than a fried vegetable dumpling, but drenched in the addictively sweet and salty sauce along with a leafy garnish, was just enough to make it a ravishing dish.

Overall, the prices at Rokbonki were extremely affordable, especially considering the fact that seafood is typically quite expensive. In fact, I was surprised to find modest prices paired with both the high quality of the restaurant itself and the great cooking.

In essence, Rokbonki is a must–try for any sushi lovers in the BG area. Not only has it showcased the art of Japanese cooking, but also the power that good food has to bring together complete strangers.