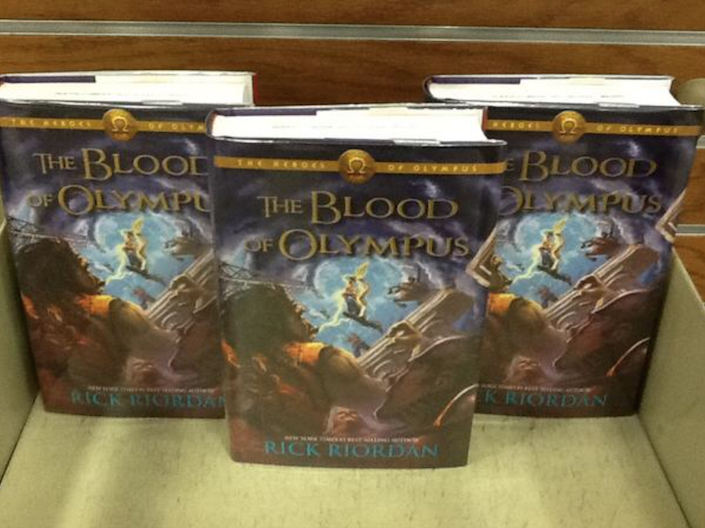 The BG library's brand new copies of "The Blood of Olympus"

Rick Riordan has been entrancing readers since 2005 when he released “The Lightning Thief.” Now, nearly ten years and ten books later, the epic journey of Percy, Annabeth, Grover and many more will come to an end.

The Percy Jackson series drew to a close in 2009 with “The Last Olympian,” when Percy finally defeated the maniac Titan Kronos. However, the story ended with a final prophecy, a prophecy which, per usual, signaled the follow of another adventure.

Sure enough, Riordan published a follow–up set of books, “The Heroes of Olympus” a year later. After another five years, the fifth and final book of the series, “The Blood of Olympus,’’ has been released and has proven to draw the entire storyline into its end.

In almost ten years, this gang of demigods both old and new has embarked on countless endeavors and faced insane challenges ranging from locating and returning Zeus’s stolen lightning bolt to preventing the Earth Mother’s awakening.

In this riveting final installment, Riordan illustrates the race to save the world as the heroes rush to transfer the sacred Athena Parthenos statue back to the Greek camp to appease both the Greeks and Romans, all before the Earth Mother to destroy Mount Olympus once again. Since there has never been peace between Roman and Greek demigods, they must act to prevent both a gruesome battle and the end of the world.

Riordan takes an approach in “The Blood of Olympus” that contrasts his style in other books. As you go through the “Heroes of Olympus” books, you’ll notice that the author entertains the point of view of each character in order to gain contrasting insights of the events within the novel. However, in this final adventure, he neglects one character, that characater being none other than Percy Jackson himself.

Percy’s feelings are not depicted even once from his own mind. In fact, the only times you hear anything from Percy are when the story is focused on Roman demigod Jason Grace. That’s the only aspect that was truly disappointing about this book. The adventures began with Percy, so I believe that it should’ve ended with him to provide avid readers with some sort of closure.

Other than that, the novel was thrilling from beginning to end, with twists, turns and cliffhangers that may very well send readers into a state of emotional turmoil. And, as always, Riordan exercises a healthy dose of humor to juxtapose the strenuous situations in the plot.

I found this plot to be one of Riordan’s most complex and enthralling. He always keeps his readers on edge, whether in the midst of a battle scene or figuring out the next piece of a puzzle. Never have I been so sad to end a story, knowing that there would not be another adventure to come.

Riordan is a true genius in the way he has constructed these characters. It is said by many that one great event can not be revisited and done with the same level of greatness. Riordan has proven them wrong, making the follow–up lengthier and adding an extra dose of adrenaline. After laying down this book, you’ll reflect on the last ten years of your life and smile, secretly hoping that the characters you’ve grown to love leap from their pages, offer you their hands and ask you to accompany them on one last journey